With the number of tanks installed in the van, a total of 11, of which 10 require level display one has to think a little about how to organise that effectively. The solutions I found in the vans we looked at were not really satisfactory at all and having 10 displays or at least 3 combo displays for three tanks did not appear as a good solution either. All the solutions used in vans only show 5 levels (full, 3/4,1/2,1/4, empty) or even less. With larger tanks this becomes ineffective because one cannot really trace usage very well unless one installs a flow meter from or to each tank. Flow meters are not very accurate and are useless to measure tank content when one pumps water between tanks unless one installs a rather complicated solution. Even then the tank display is not fully automatic because every time a tank is full the meter requires resetting to keep the display reasonably accurate. This is all well and good if one has one or two water tanks, but with a larger number it becomes very tedious. 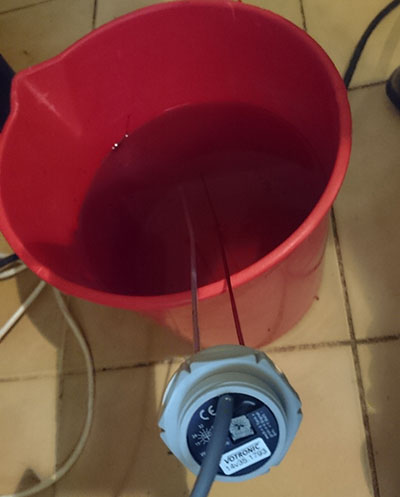 The majority of tank level display solutions used in caravans in Australia have tank senders with multiple pick-up points for the predefined tank levels to display, mostly 4 fill levels + empty. These senders do not deliver continuous information, only discrete values and the levels between two display levels is undefined.

For me this is not a state of the art solution in particular with tanks of 150l. I want to see a difference in level display when I pump 20 or 30 litres into one of the 4 fresh water tanks. This is not possible with the most common display concepts. And not that they are cheap either, quite expensive for what they are. High priced, half baked solutions.
The way to overcome these deficiencies is to use a sensor technology which allows a continuous read out of the tank level. A capacitive sensor is capable of doing just that. I have found only one company in the world with such technology, producing a display with sender which is meant for caravans or mobile homes and are reasonably priced.

The sender unit consist of two metal rods creating a capacitor in the fluid and a bit of electronics to obtain a continuous read out.

The output of the sender unit is a voltage between 0 and 2.2 and i

s used to drive a led display with 10 levels. The actual signal is analogue and continuous, which means that any level can be read and the display is just a compromise.

The display also controls the sensor and has a button underneath the symbol showing the tank type. The button is pressed to start the read out and the display is lit for 10 minutes and then shuts off again.

As nice as these displays are, having 10 of them installed and needing to press 10 buttons to see the levels of all tanks is not really a great solution. They look good, are well made, but the solution is too manual.

I would like to have more information out of my tanks displays, like average use per day, total used per week, amount of litres of the last shower and so on. I also want a warning when the holding tanks get to a level that they might need attention in the coming days. This kind of application can only be done through a control unit which can be programmed.

I have already decided that I use a central controller to manage all lights and switches, so it is pretty obvious to use the same micro computer for the tank level display. 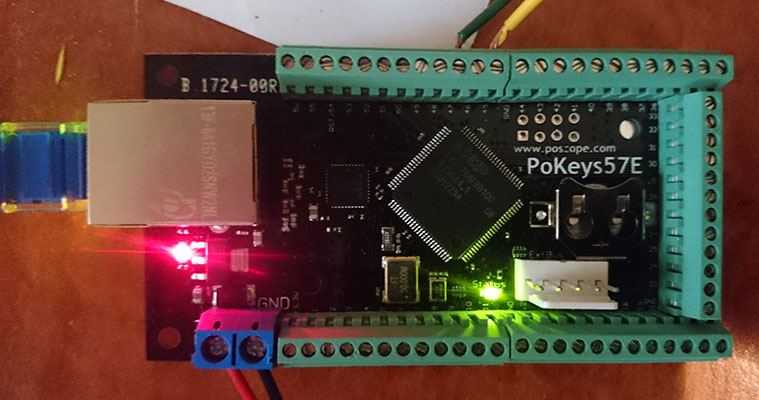 The picture above shows a little board, which is connected to my in house Ethernet and to the tank sensor in the bucket. My desktop computer runs a little application to read the analogue inputs of that board and the signal connected to these analogue inputs. Votronic has done a brilliant job by providing a tank sender which already creates a voltage from the capacitive sender. Usually this requires a frequency and a timer logic to identify the capacity of the probe and derive the voltage from that. The tank sender has that logic inside the cap. It can also be adjusted with a trimmer potentiometer to the depth of the tank.

The picture to the left shows the display of the analog inputs of the application on my desktop computer. The Input 47 with 1.32V is the connected sender corresponding to the level of water in the bucket. The picture to the right shows the cap of the sender with the depth adjustment. Brilliant solution – and the sender is not more expensive than the mediocre solutions one gets from caravan part suppliers.

The good thing about the sender is that one can read it directly with a micro processor because the output signal is below 3.3V, which is the standard for most analog inputs. Reading the output of my dim switchese a bit more effort because the 12V output needs to be stepped down below 3.3V, but that is also not rocket science. I will describe this in another chapter.