In the whole of the van we have many lights for different purposes, requiring different controls.

In today’s day and age all these lights can have one thing in common, they are low energy LED lights. But not all LED lights are created equal. There are different types or LED lights and it effects the way they can be controlled, say dimmed. Simple on/off is the way you find it in most, not to say all vans.

Ceiling down lights with touch switch creating a sterile bluish white light are very common in todays vans, but the light is ugly and inconvenient. One has to touch the light again to turn it off and if you have several in the van you have to touch them individually unless you switch off the circuit breaker. This is what I was told by one caravan manufacturer when I pointed out that I would not want to touch 8 down lights individually to switch them off. When I look at the list of lights in our van, I immediately knew that I have to find ways to limit the number of switches, optimise the cabling to the switches and have a control facility which allows me to switch and /or adjust lights in groups as well as individually, but also can switch off everything with one push of a button.

In order to design the light circuits one has to look at the different types of LED lights and the way to control them. It would also be nice to be able to control a light or a group of lights from more than one location, which is simply not a feature in any of the vans we have looked at.

The two types of lights I am using are LED strip lights and LED MR16 bulbs. The latter are dimmable with simple voltage regulator dimmers (6V-12V usually), the strip lights need a special signal to dim the LEDs, which is called PWM (Pulse Width Modulation). I use two kinds of strip lights, the monochrome (white) ones and RGB (coloured) ones. The white ones require only a single channel of PWM signal where the RGB ones require 3 channels of PWM signal to create the colours. I am not really interested in a disco lighting or American Christmas tree with all the coloured lights (well Australians are not much behind that either), however it is nice to have control or colour temperature to create pleasant night lighting or dimmed warm white with a touch of colour for a nice surrounding atmosphere. Is it necessary? No … but it is really cool and todays technology makes it possible although caravan manufacturers have not yet gone to the level of engaging interior designers to create a bit of an “ambiente” in our homes on wheels.

he two types of switches with dimmer option can be seen in the image at the top of this page and to the left. Unlike conventional dimmers, which have a knob to rotate, the dimmers I use are touch sensitive. The one option has two separate buttons for lighter and darker and the switch to the left is a sensor switch, which can switch on and off and when one holds the finger on the switch it will dim up and down automatically.

I also have the same switch mechanism in a box for in wall installation. The switch is not visible but sensitive when the hand moves or rests over it. 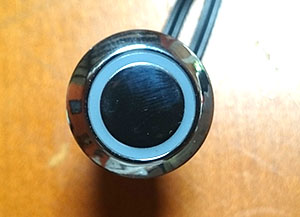 The pc board at the back of the switch face is very low profile and only a shallow cut out is required to accommodate the switch electronics. Since the electronics only need to communicate with the switch controller when the switch is actually used the 12V mini battery will last for ages. It can be changed by removing the face plate.

This dimmer switch controls MR16 LED’s directly by controlling the supply voltage and the controller can drive lights up to 8A at 12V. So most lights in vans can be easily controlled and these switches are easy to install after the van is built. They are great for updating a van and modernising the lighting without the need to run cables everywhere.

As nice as these switches are (and they are cheap too – much cheaper than conventional, old fashioned, ugly Clipsal switches) they cannot dim a strip light. They can switch it on and off but cannot dim a strip light because this type of light needs a pulsing signal for dimming. One needs a special controller for that to happen. 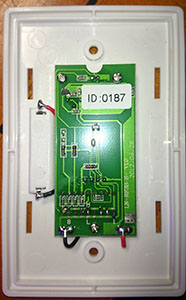 There is another important aspect of switch control and that is the requirement of multiple switches for one light or group of lights and a one button off switch functionality. If one would want to achieve this with traditional wiring it would be a very daunting task for a van like ours, virtually impossible. Another disadvantage of traditional wiring is that all functions are hard wired and cannot be changed in any way. For example, you have 6 down lights, 4 in the kitchen and 2 over the seating area. They are wired together using one switch. All 6 lights switch on and off together. At one stage you would like to separate the 6 into two groups of 4 and 2 and want to switch the separately. This is very hard after the installation, if not impossible. There is one concept which allows any form of modification of switching functionality without changing or adding wires. This is the concept of software controlled light switches. 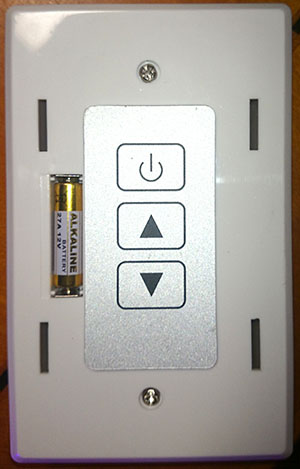 Such a concept requires that all light switches are wired to control inputs of a microprocessor and all lights a wired using control outputs and drivers for the lights. This way all switch functions are defined by software and can be adjusted at any point long after installation.

The central control of all lights has another couple of advantages and this is the possibility of resetting (switching off) all lights or groups of lights with one push of a button or tap on the touch screen. Another point is the combination of on/off functions and dimming functions in groups, where the groups of lights don’t have to be predefined. For example: One could program that all lights in the kitchen dim to 20% and the lights above the seating area go to 50% and the lights around the skirting go to 30% in a warm white. All this is just software programming if the connections have been made beforehand.

There is one more aspect which I am going to use to reduce the wiring effort. I will use my dimmers for the MR16 lights directly, not through the microcontroller but have a relay in the circuit which can open on demand from the micro controller and interrupt the power supply to the sensor switch. This will switch the sensor switch off and also the connected light. This allows to switch off lights automatically, however the central controller will not be able to switch these lights on. This is a purely manual function. I will use this concept for the ceiling down lights, which are not part of the ambient lighting where automatic control is not required.

This decision eliminates a few wires and also a few analogue inputs at the signal collector microprocessors. I will write a bit about the network of micro controllers in a separate page.

Because I connect all dimmer switches which will control a light strip through the central microprocessor to the micro processor network I can use the same dimmers as for the MR16 lights. The analogue input will allow to read the output voltage of the dimmer switch and the microprocessor will convert this to a PWM signal and drive an amplifier to create enough current for the connected strip lights. Many switch functions will only be possible from the central touch screen and will not even have a separate physical switch. This is done to remove complexity and number of switches, however in some case it can be inconvenient to use the central touch screen for some functions. For example, being outside and ready to have dinner and inside all lights are on. One would like a function, which switches off all interior lights but leave only a few on low energy to allow easy and safe entering of the van. It is inconvenient to go inside to perform this operation. In this situation the central system shows its strength because it is easy to implement a phone app through which the central system can be controlled. And this is what I am going to do. All functions (may be a few less important ones not) of the central system are available through a phone app.

So far I have written about manual switching, meaning the switching process has been triggered deliberately and manually through touching a switch or taping the touch screen. 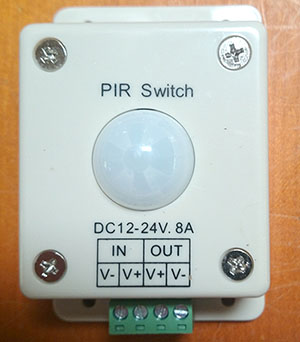 This automatic switching is realised through a PIR switch (Proximity Infra Red). This particular model can drive lights up to 8A and has a fixed short delay before switching off again. As a proximity switch it switches on when movement is detected and switches off after 30 seconds. It can drive a strip light directly but it would not have dim functionality. In my case I will let it switch a relay which connects the corresponding strip light to the output of the driver. The intensity and colour of the strip light is preconfigured through the central microprocessor. If the skirting light is required to be on permanently the central controller can activate the same relay as the PIR and hold it closed until the light is switched off.

At this stage I think that these are the only switches I am going to use. I do not see the need for anything else.

I have not yet completed the list of signals and have not determined the number of micro computer components I will need to service all required signals.