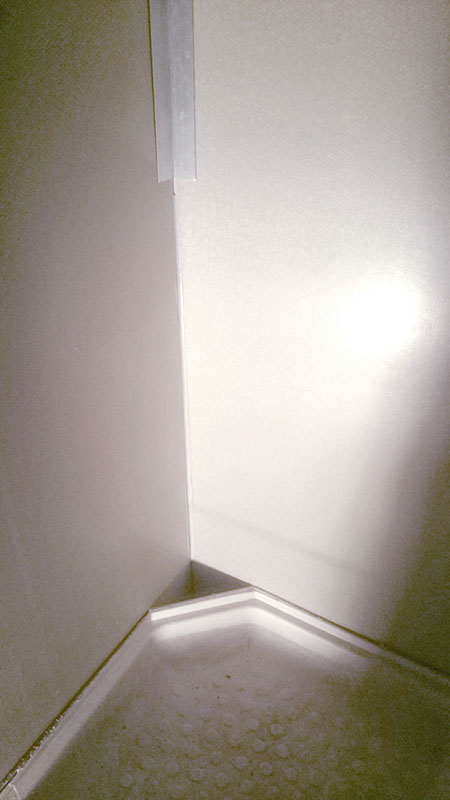 I use 6mm alu honeycomb with single layer fibre glass surface as the back walls. Glued an alu angle into the joint to stiffen it up a bit. 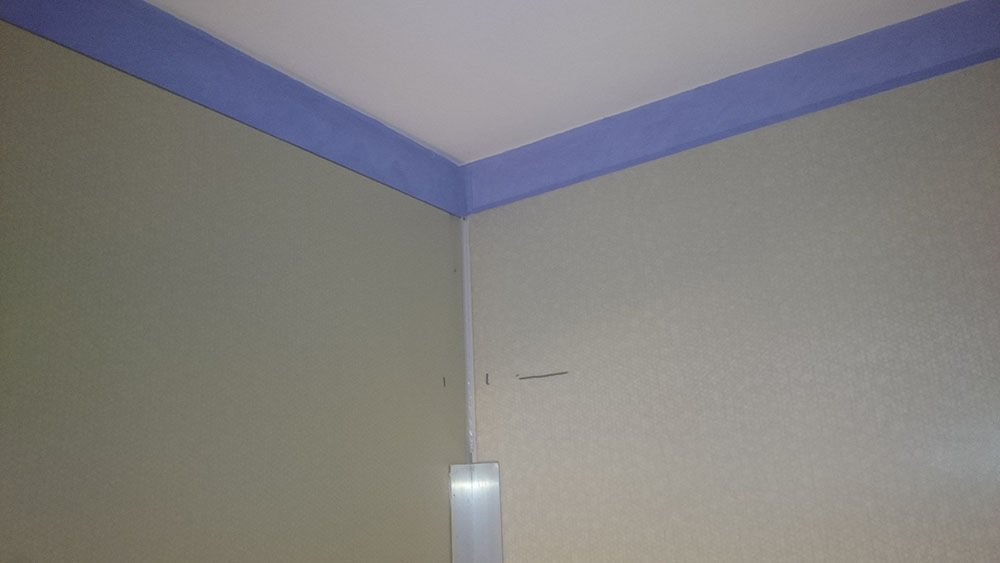 I have a bit distance to the ceiling and will use the cavity between the shower wall and the outer wall to install a strip light for indirect lighting and the plumbing. 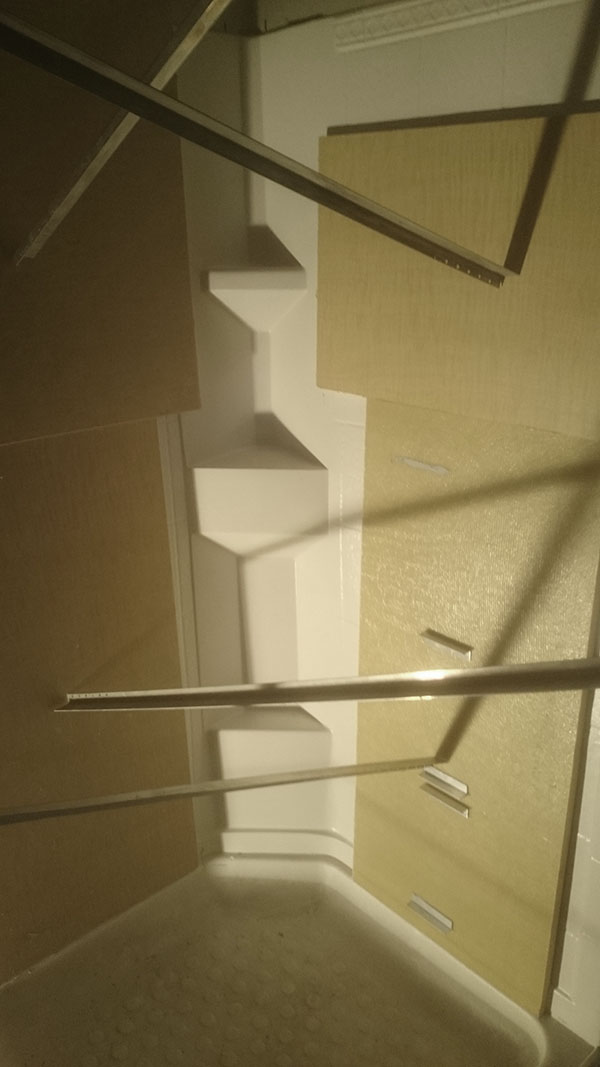 In the next step I glued the shower wall skin to the rear walls and braced larger boards between the bath room walls until the glue dried. 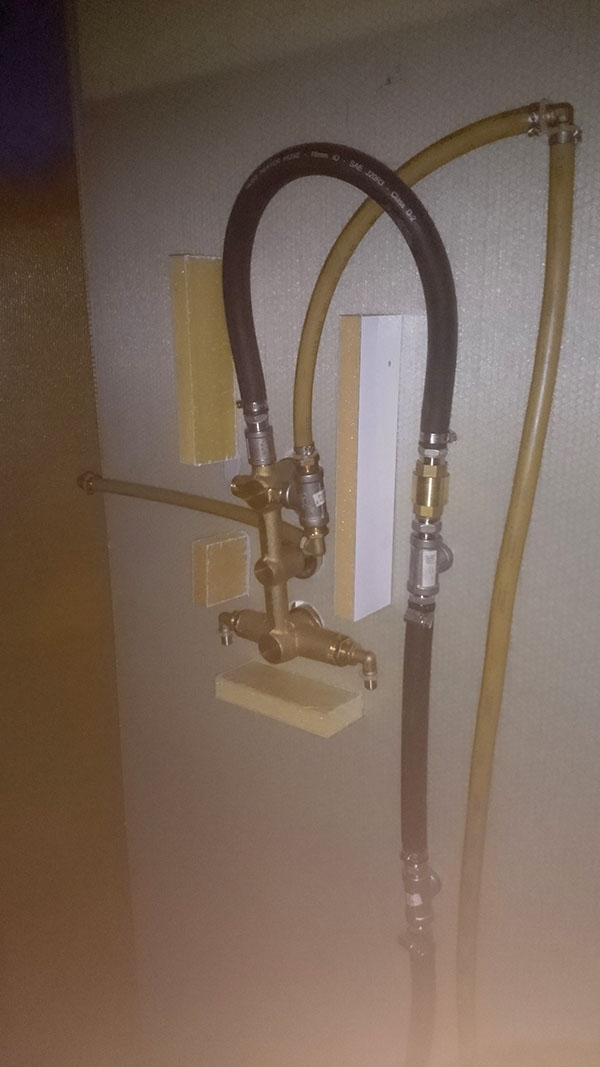 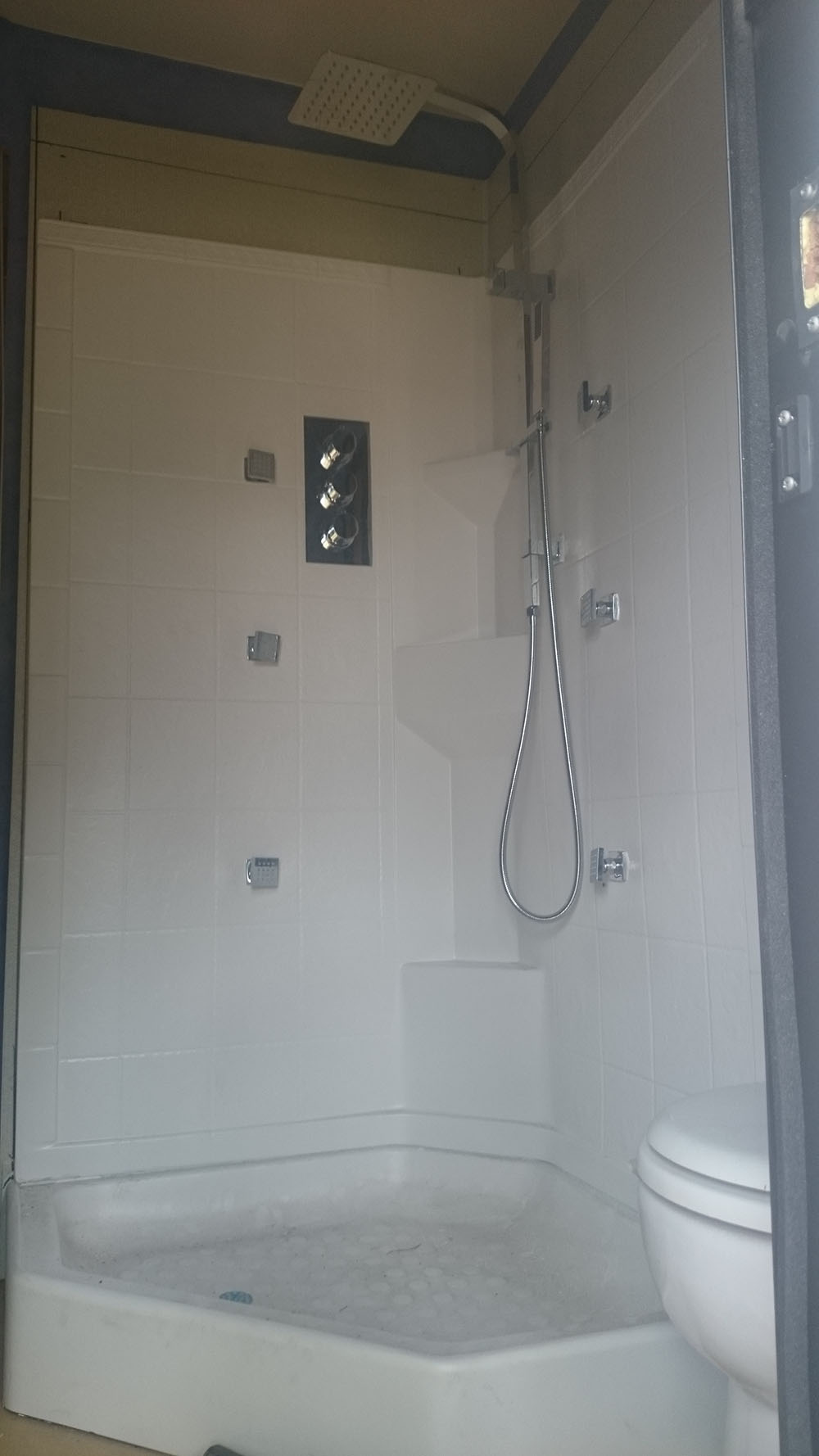 I use a thermostatic mixer with diverter. The diverter has 3 positions to select the jets on one side, both sides or the shower head. The head rail has it’s own diverter to select between the head and the hand shower. The top part is not painted yet. Both sides of the walls will be trimmed with a white alu angle.

Most of this was done a while back . The last days I fitted the drain and done the plumbing, however not all done yet. 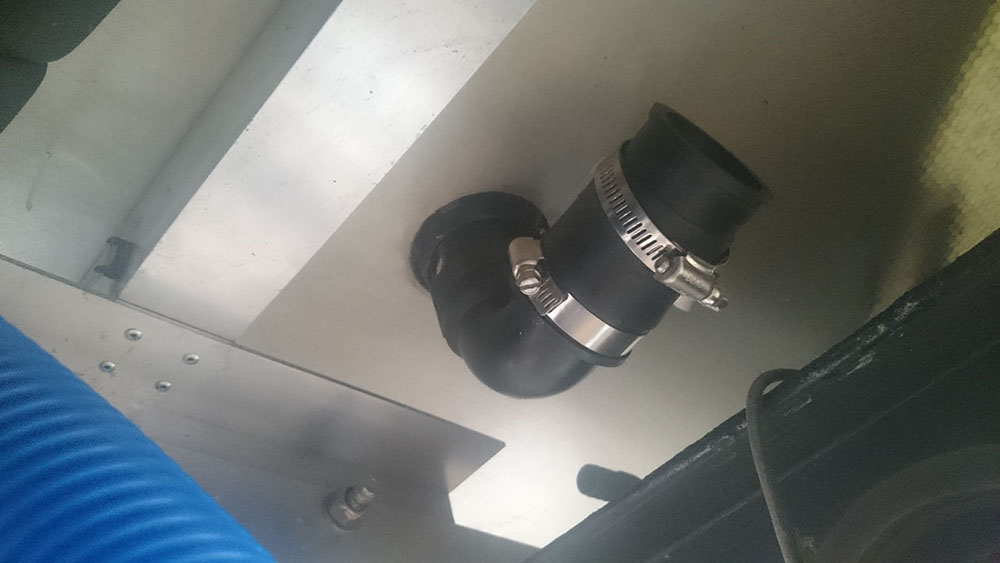 Above image shows the drain underneath the floor. Whenever I have to move the shower this needs to be removed first, otherwise the shower base has nowhere to go. 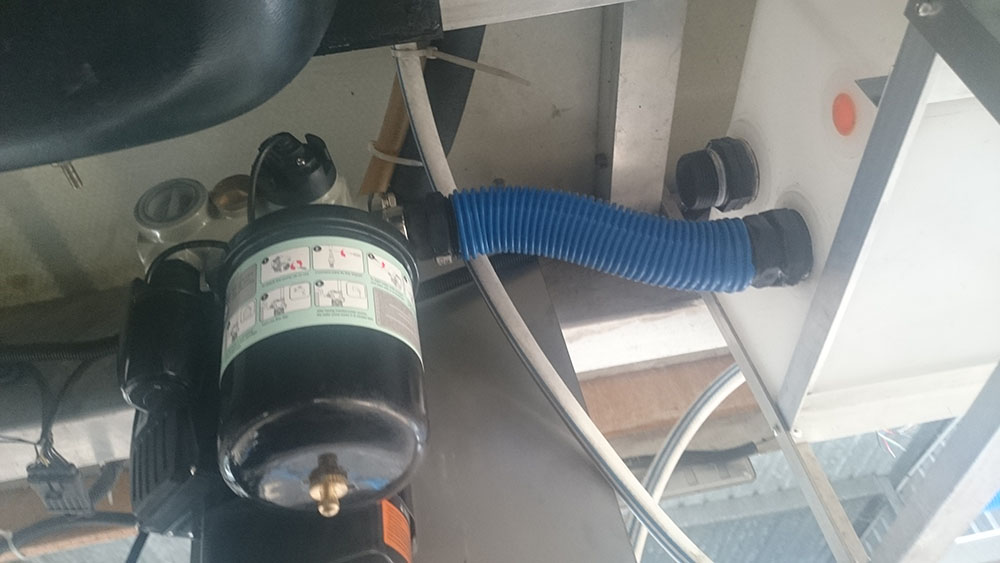 Above image shows the circulation tank to the right and the high pressure circulation pump to the left. I mounted the pump on a stainless steel plate to make it solid for the rough tracks. I will remove the connection between the tank and the pump again. I decided to put a strainer it this spot, just to make sure the pump does not suck in anything damaging. 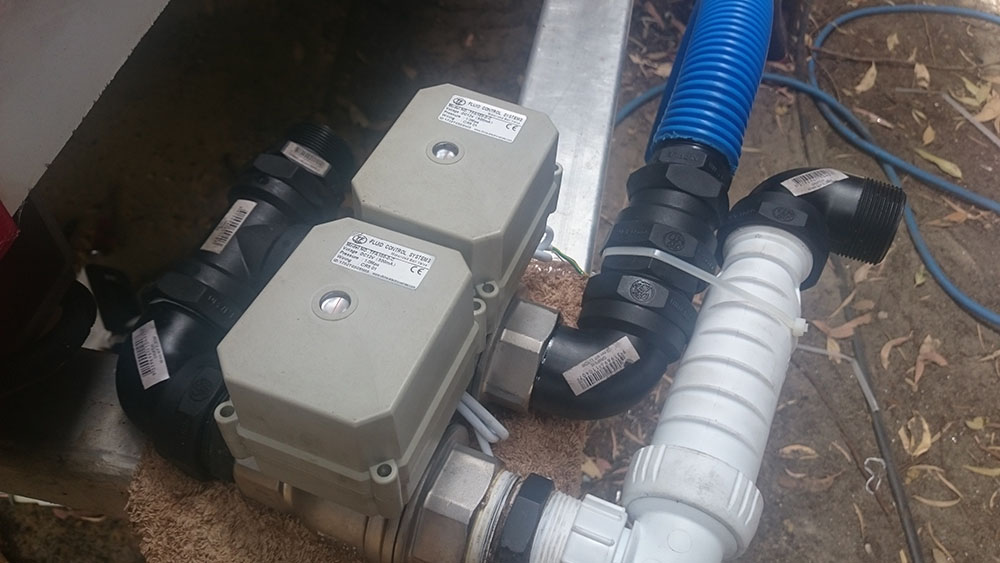 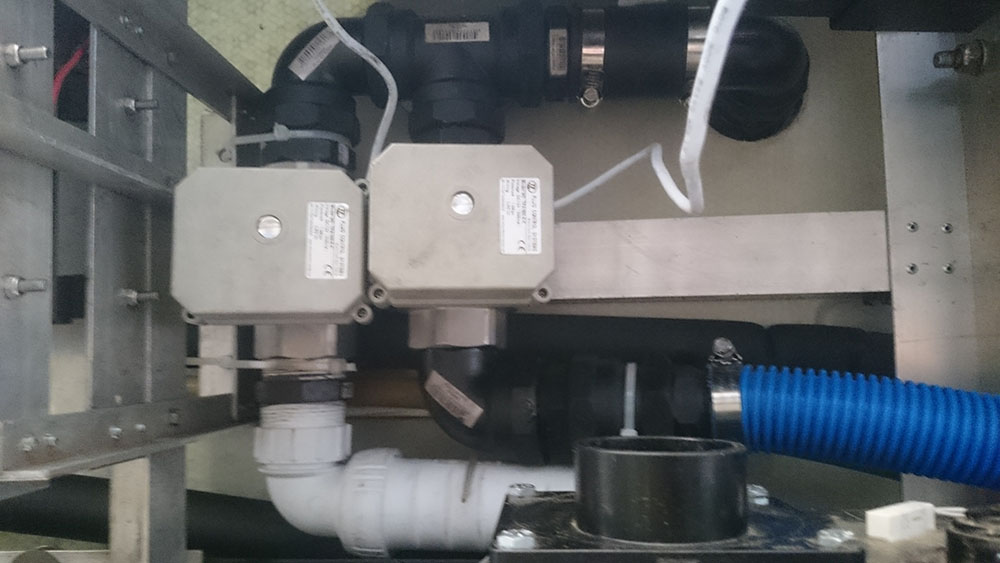 The image above shows the valve block in place. The connection to the shower drain is made with a rubber joiner (see below) for easy removal in case the shower has to be removed from it’s place. At the moment the block is held with some cable ties until I will finalise the permanent brace. Everything needs to be rock solid when going on corrugations. 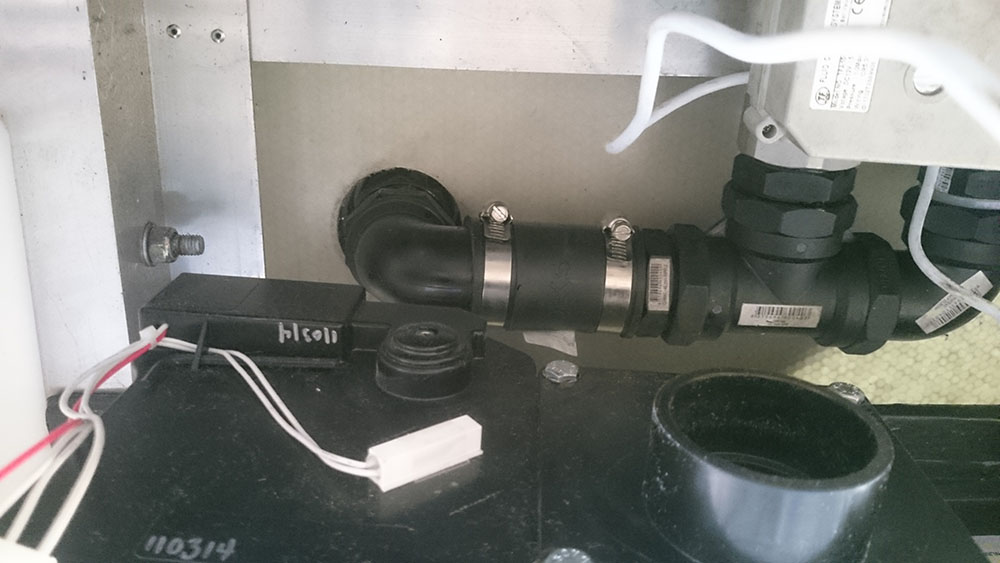 The image below shows the connections to the circulation tank. 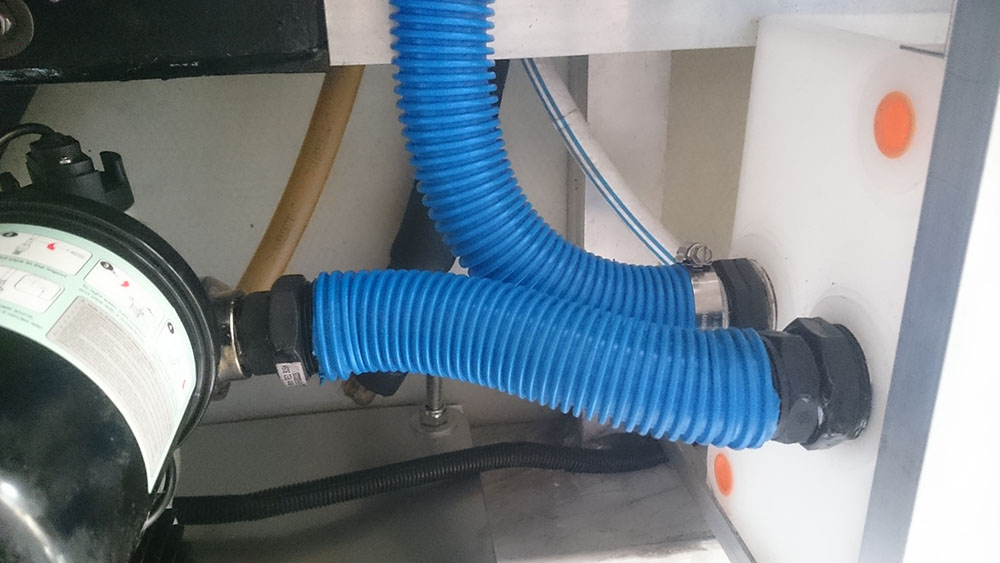 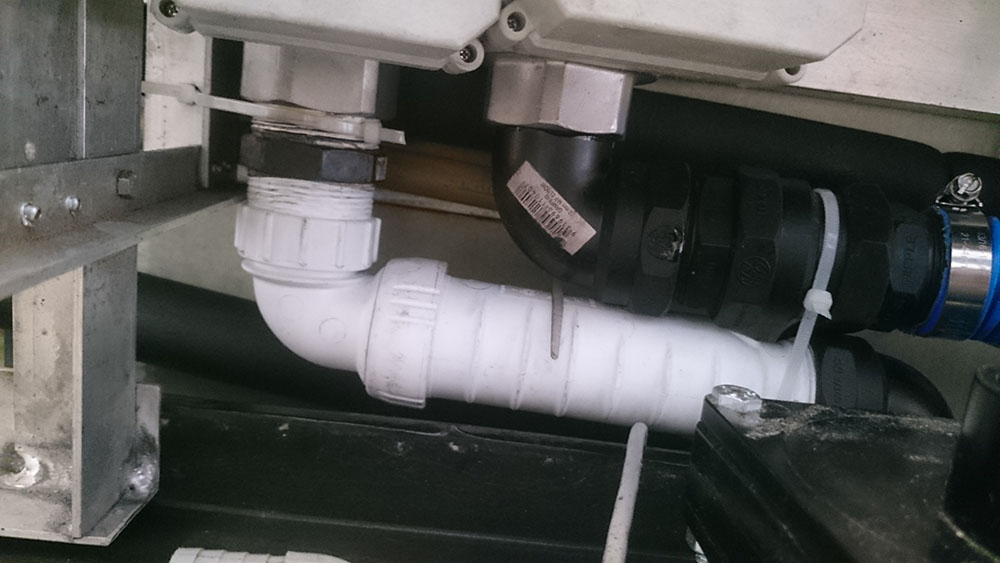 The hepo valve is accessible when it requires maintenance. 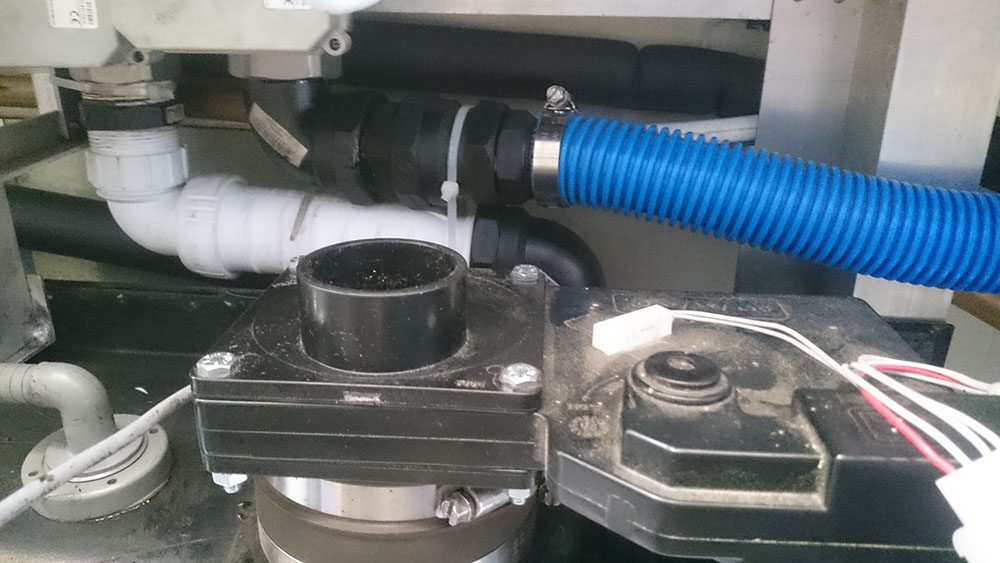 I reinstalled the gate valves for black and grey water. The connection to the waste pump was temporary, I had to remove it to fit the valves. I will have to redo the connections since the are got a little tighter, but still easy enough to get to everything. 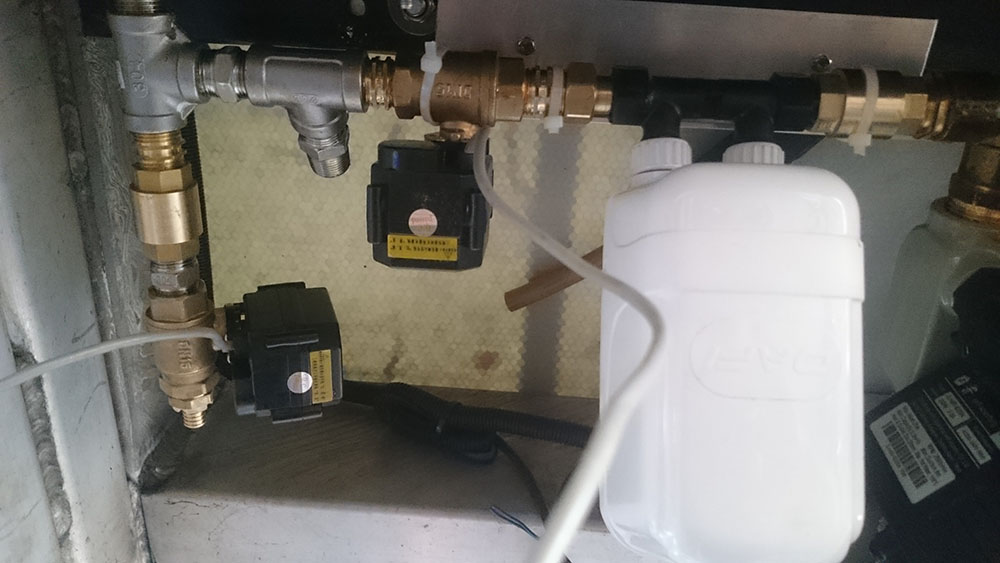 The next step was the installation of the re-circulation and the hot water supply to the shower. Check valves and ball valves for flow control. I also installed a brace to stabilise everything. The white part is an on demand heater to keep the water at temperature when circulating. The connection to the up pipe to the mixer will be made with a flexible braided hose and the hot water connection to the left with PEX pipe. It took a while to fiddle out the best way to install it and then to take it apart again and seal all the threads. I use a check valve before the heater to make sure water remains in the heater. The microprocessor will first open the circulation valve, which makes sure the heater remains filled before it is switched on.

Tomorrow is an office day again and I will not be back until Thursday afternoon to continue. Will need another couple of days until the plumbing is finished.