Again some time since the last post. I have been pretty busy with my commercial project, but still managed to do a few things on the van. Next week I will be in Sydney again for a few days, so not much time right now for the handy work.

I cleaned up the mess on the floor a bit and had to move the fridge out of it’s recess to get to the cables behind the switch board and battery panel to bundle them properly.

I also continued working in the bedroom. I built and finished the night stands in the slide-out. The top is halved, the rear is fixed and the front is hinged. 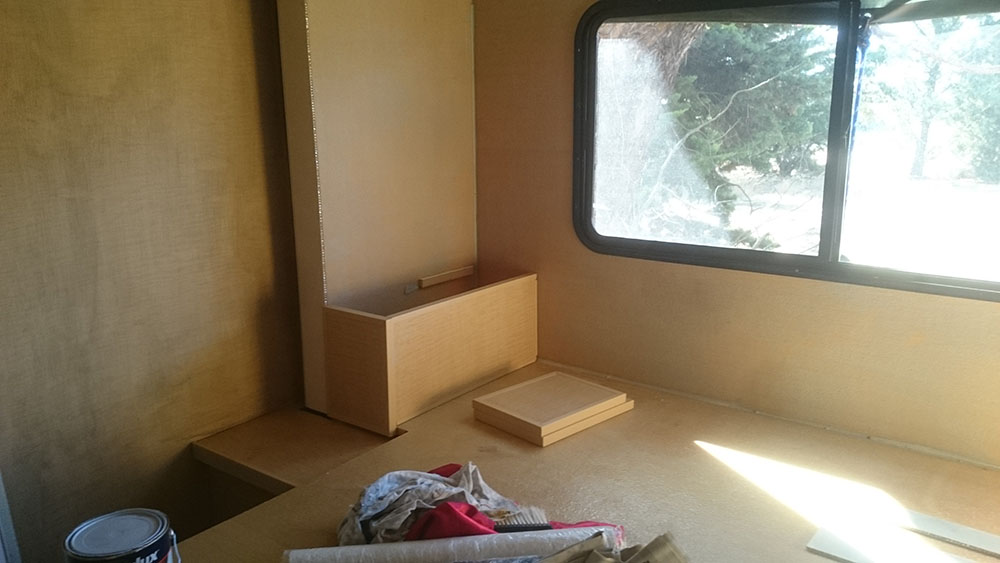 I glued the base for the pelmets into the slide-out and fitted the covers for the cable channels behind the slide-out frame and the ceiling.

I pulled a couple more cables in for the lights in the slide-out and the power connection for the blind.

Then I finished the sub board for the bedroom and the bathroom. 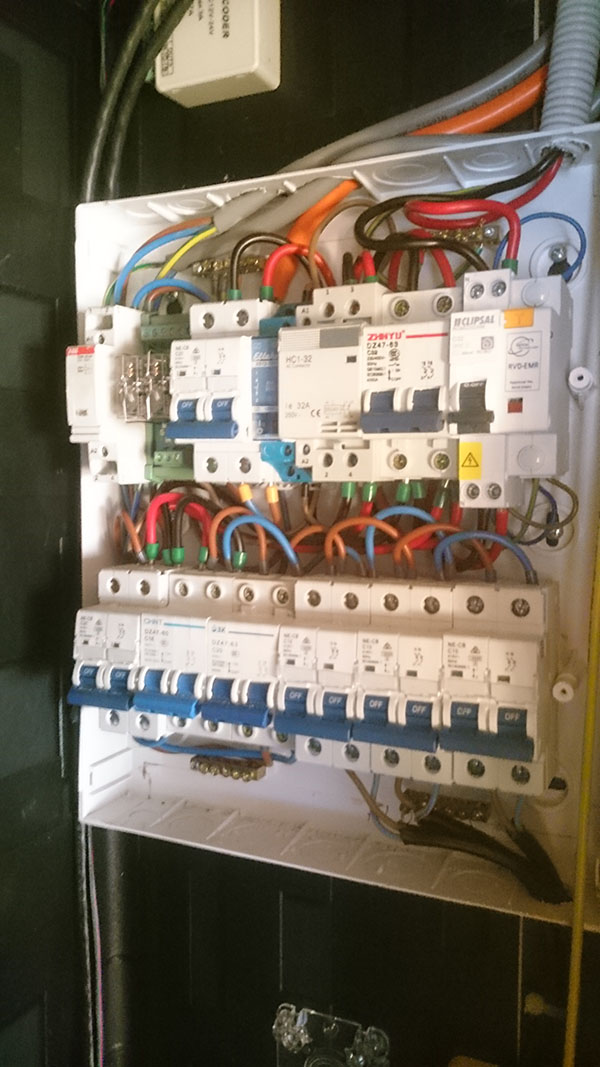 Next step was finishing the ceiling and the walls. We had selected two different wallpapers, one for the ceiling and slide-out front and a second one for the sidewalls with matching texture. I am not really sure if this is going to work long term, but painting is still an option, as I have done with my work area and the bathroom. However for now we will try with the wall paper since it looks the way we wanted it. 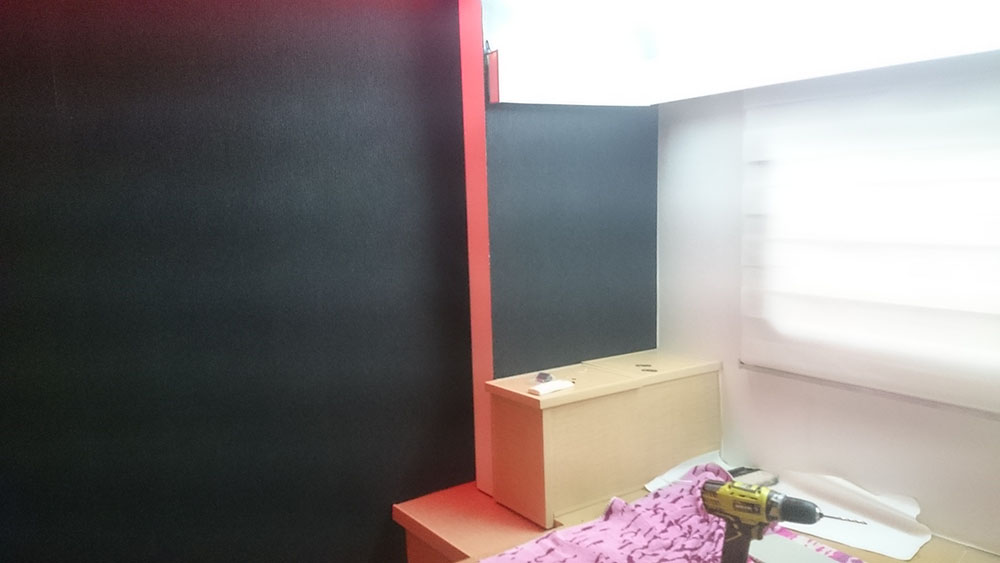 The side walls are black and the red in the picture comes from the wall washer light at the ceiling. This light is an RGB light and is controlled through the DMX bus and can be adjusted to any colour or brightness continuously. The night mode is either red or blue with a low brightness. To the right it is quite bright and that is from the indirect white light above the blind around the top of the slide-out. The phone camera is not really great to capture this properly. Will make some decent pics eventually with my DSLR, but for now it needs to suffice. 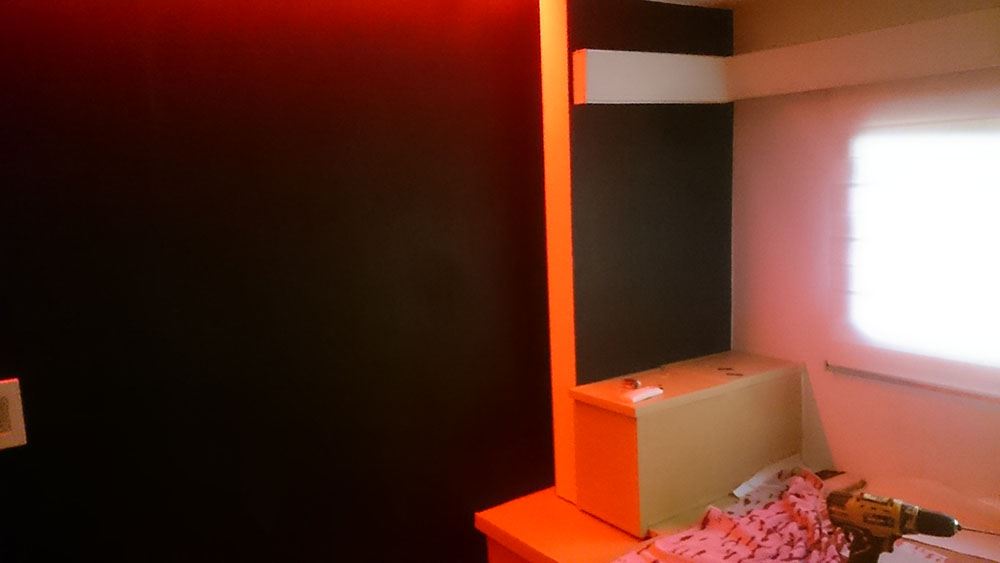 The image above is taken with the white light off. The texture of the wall paper does not really show in these images either. The web sized images are not really that great anyway as far as detail is concerned. 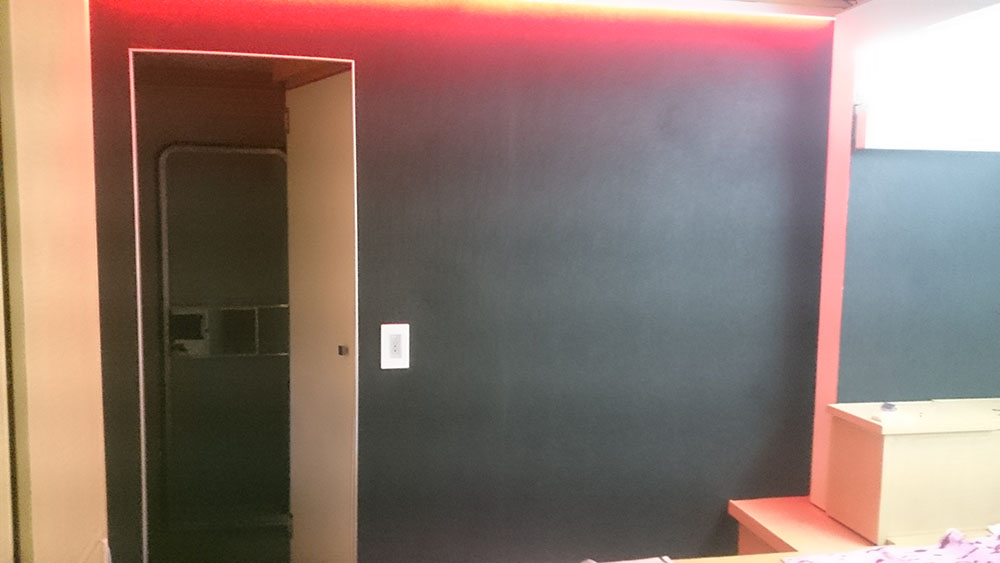 The above image shows the door frame and the door to the bathroom, which I also did in the last couple of weeks. The door is kept closed using a magnetic strip along the vertical edge. 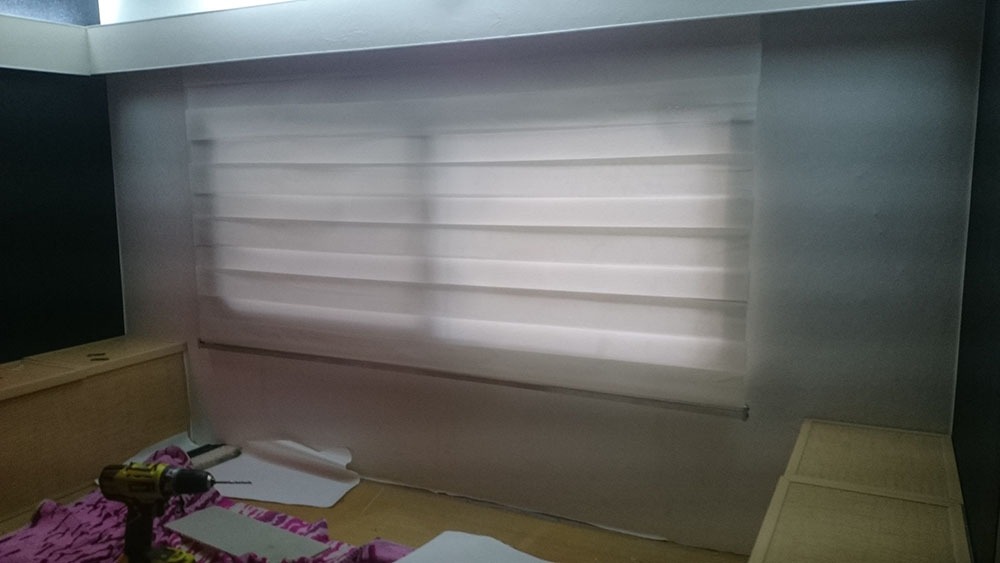 The above image shows the blind I made and installed behind the pelmet. The trim around the pelmet is finished. It is the same alu capping as I have around all the other pelmets and the slide-out frames. The white light above the pelmet is the main light switched bey 3 switches, 2 on each entry and one in the centre of slide-out, which is not yet installed. We will have a header board behind the mattress and the switch will be installed on top of that.  The blind is electric like all the others and can be raise and lowered with a remote control. A simple push of the up or down button is enough. The motor is programmed to the high and low position, so one does not need to adjust that manually all the time. The colours do not come out that good in these pictures as they appear in reality. As I said I will eventually make some proper images when everything is finished.