We had a discussion about the rear deck again and have decided that we want the deck but not the sky-deck from Melbourne for several reasons. One is price of course. 15k is over the top, but more importantly it has a design problem.
After looking closely and making a few calculations, and also some statements from the conversation on the phone made me sceptical. I was told that the sky-deck does not like a twisting body at all and that internal stiffening is important.
This made me think. The fact that the sky deck has only the support from the roof end of the van and that they show a foot support  on the motor home version with the total load being limited to 400kg disqualified it for me. I do not want that force pulling from the top of the body at the end and I do not want to stiffen up the end to minimise twisting of the body. This is not the way I designed the van.
Unlike a caravan or motor home I have an advantage as far as the deck support is concerned and that is a big, long , hollow chassis rail. So it is quite simple to slide a beam into the chassis rail and let it come out as the main support for the deck. Would not require any cables or anything pulling hard on the rear end. The full weight would we supported by the chassis which can take that weight easy, especially since I have still room to to the max overhang of 3.7m. I also have a 5t hydraulic leg on each side just behind the rear wheel being fixed to the part of the chassis where the main rail is 12″ high.

So I have measured, done my calculations and designed the mechanism to deploy the beams. 80x60x4 alu has a yield strength of 215Mpa (and that is the flimsy stuff – not the structural). The simulation for the stresses on a lateral beam shows that I can easy put 600kg on a couple of beams at 2m out.

Inside the main rail are rollers, bolted to the side (I will get them in and out again) and support the beam being driven out by a unc threaded rod and a small motor at the end. So simple that I did not even think for a moment to make it manual. 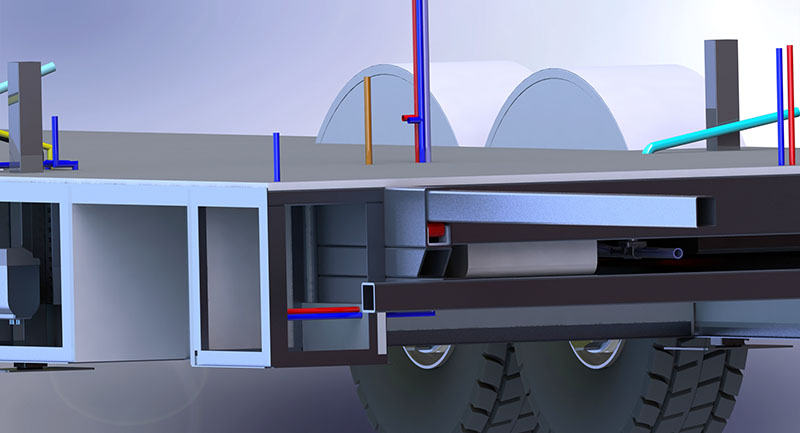 Above render from the cad system shows one of the rollers inside the main rail carrying the beam. The end is secured so the beam cannot come out. Two will carry the total weight of the deck plus 500kg payload without any additional support. No cable pulling on the body, not even the balustrade, which is also fully supported by the chassis. No difficult calculations or speculations about
twisting forces. The deck is lifted with a nylon cable and a small electric motor rolling up the cable. The body has only to support the deck while it is lifted, not a big deal for the composite panels and a FRP strengthened corner. 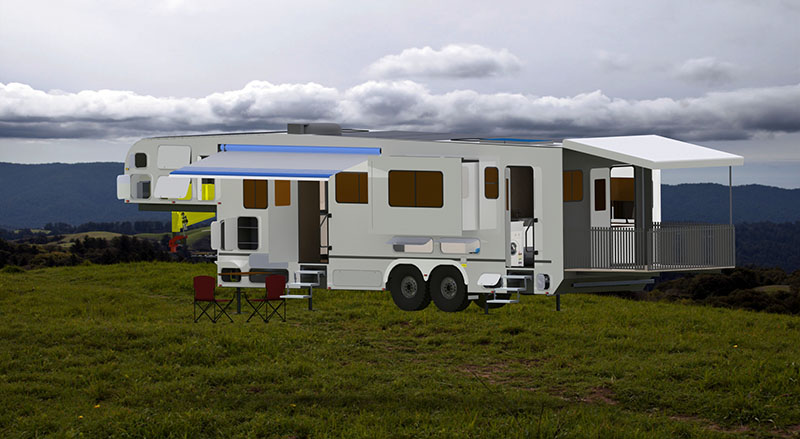 I am very confident this will work well.