Just a quick reference to the components I use for my Internet of Things in the van.

1. Udoo under Ubuntu (Linux) with an on board Arduino (second processor)

3. PoKeys57E client board with integrated Ethernet for signal IO and Ethernet to server

4. PoKeys Extended bus board with 8 relays for signal switching via PoKeys57E

5. X2-Board (Arduino compatible) with integrated Ethernet for signal IO and Ethernet to server

6. Arduino UNO with Ethernet shield for local signal IO and Ethernet to server

9. 16 Relais IO board driven from DIO pins of an Arduino or Pokeys Board 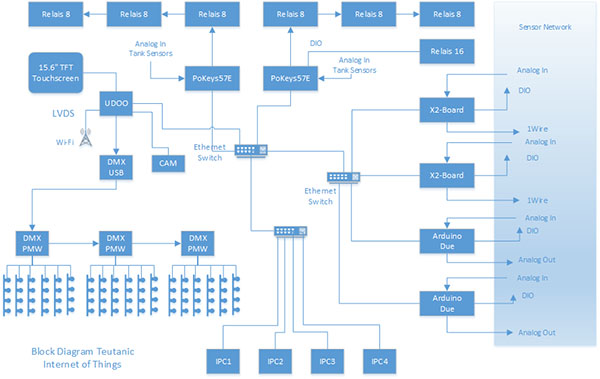 Communication between the boards is implemented through Ethernet. This is obviously a compromise for the sake of programming ease and portability because it has a major disadvantage, which is the need for switches. I can get away with an 8way switch but then I have to run more cat5 cables along the length of the van. If I use 2 switches I can connect them with one cat5 cable and place them at the front and at the back of the van. At this stage it is not decided. However, this maybe not forever. I have selected the Udoo and the Arduinos because they can do CAN, but it needs a bit more research, because at this point I have not found any libraries supporting the protocol on the Arduino yet. Eventually I might be able to remove the Ethernet switches and connect the Arduinos via CAN bus. This is surely not happening before we start travelling. So Ethernet it is for now. We have enough battery power anyway to drive the Ethernet switches.

All light control is done via DMX512, which is a protocol developed for light control on stages and also used in houses. Using DMX eliminates the need to directly program a PWM signal which is amplified for connection to a light strip. At this stage I have not yet decided which lights I use via DMX and which I might connect via PWM and drivers. I am just curious about the technology and after I have tried it out and understood its possibilities for me I will decide what to do with it. There is a Linux driver for the DMX-USB module and I have 3 DMX controllers with 6 channels each coming from China. I also have some opto couplers and Mosfets coming to connect the PWM outputs of the Arduinos and the 12V analogue signals to the 3.3V analogue input from the Arduinos.