First Experience With the Victron Components

First Experience With the Victron Components

I purchased the Victron gear earlier this year. I installed the inverter/chargers, the BMV battery monitor and the Color Control GX a while ago and wired it all up, however I have not switched anything on until a couple of days ago.

I already made some comments earlier about the way Victron expects the Multis to be mounted and the case design is note really caravan friendly. Well I overcame the issue and can live with it.

I have chosen Victron for the “family” of products, meaning that the components talk to each other over a network and that I might be able to integrate my central computer system with the Victron components. However this does look not as easy as one may think. Not all required info is published on their site but I will get to that later in another post.

First things first. I connected the two Multiplus in parallel, the multi control panel, the BMV 702 and one of the multi’s to the CCGX. The BMV uses a VE-direct cable and the CCGX can take two of these connections. The CCGX was already connected to 12V power and after switching the power on the BMV came to life. At first I was shocked and thought I have a defective BMV when I saw the garbled content of the display and then I realised that they used a 7 segment display and try to visualise text on the display. Wow, 21st century, not a cheap product and then this. Maybe it is just me but I am not impressed with that. The setup is more than awkward and I am not going to waste my time and do this on the device by deciphering the text on the display. Well they also use entry numbers and one could look them up in the manual. I will connect my USB adapter and do this via PC eventually. For now I just entered the battery capacity and use it as an amp meter for battery in/out to commission the system step by step.

The next head scratch came when I looked at the display of the CCGX. 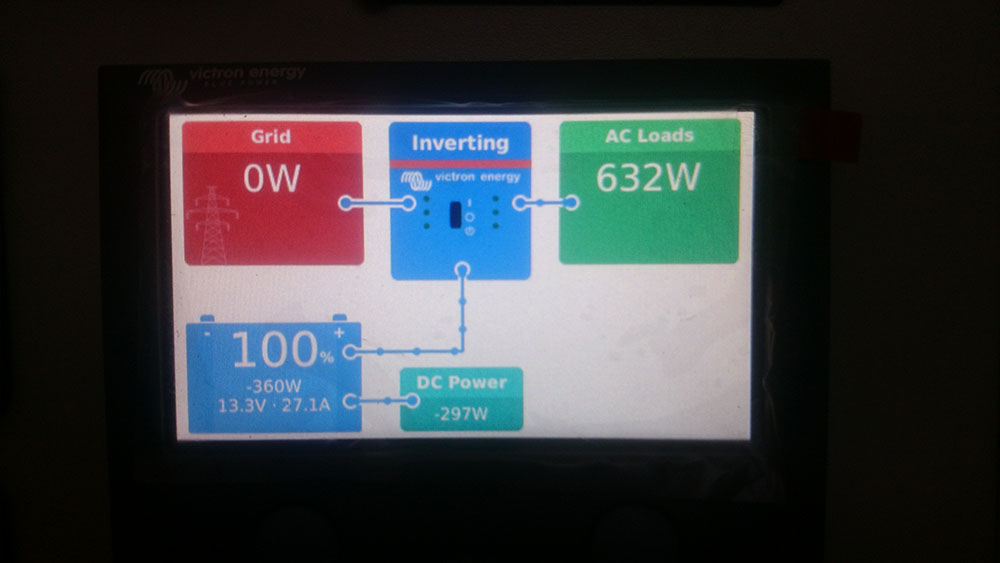 I had the aircon running as an AC load and wanted to see what the CCGX would show me. What I saw did not really make a lot of sense to me. Ok it is my logic, which is flawed I thought and told myself not to make any quick conclusions but to read the manual first. But to my surprise there is no explanation of the display pages and the one above. They describe the settings etc. but not the “pages” reachable via the “Page” button. Nothing, zilch, nada. Went online to the Victron site and thought that I might have overlooked something but the manual does not contain any reference or explanation to the picture above. Again – not impressed.

I had already that experience of incomplete documentation when I had the Multis configured as master and slave and one of them gave a status by blinking the two green led’s which is undocumented in the manual. A question to the “sales” email was answered the next day that this is normal and signalises a slave function. Duhhh … why not put that in the manual .. instead  I was told to download a software program, which would contain all codes.

Ok I said, it is probably just me, the values should be intuitive this is why they do not bother to document them. Now lets see: Grid 0, ok I understand that .. no AC connected, correct. Battery at 100%, well not really, but I have not yet configured charge voltages etc in the Multi, so I assume that this will be solved later and probably will. The display says Inverting for the Multi, which is correct at this stage and it just shows the status of the Multi(s). Ok .. good so far .. now the AC loads: It shows 632W as a load, sounds kind of plausible with one head of the AC running. But then what is that ? The battery symbol shows  -360W, which would mean I draw 360W from the battery and then there is this green field DC Power at -297W. I can only guess that the sum of both is 657 and would resemble a figure of load plus efficiency losses. To me that does not make sense, so there is still that unknown what the numbers actually say because there are even stranger things going on.

I switched on mains supply and the second head of the aircon.  Now trying to make sense of the numbers is even harder, it just does not add up. The Multi reports DC-Current of 94.2 Amp (charging I assume as the status indicates) but the CCGX shows 43.8 Amp and the BMV a second later shows 43.2 Amp going into the battery. From that balance the DC Power of 687W is totally unclear for me where it would go. So not that intuitive afterall, at least not for me. Maybe I need to raise my IQ above 160 for that to understand without the proper specs. Wait I thought , this might be an older firmware having problems dealing with parallel Multis. Give them the benefit of the doubt, they sold a few of those and others might have had some questions. 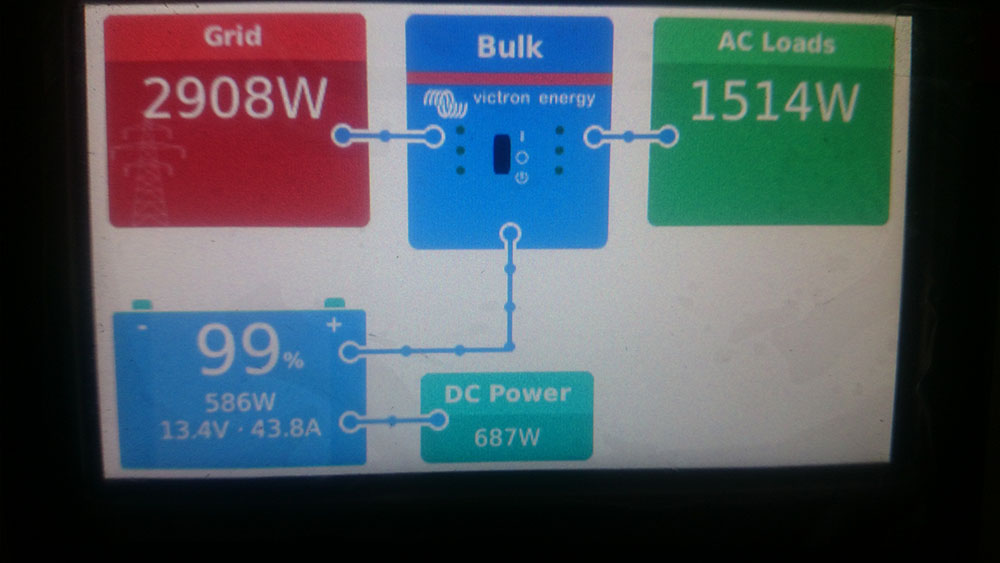 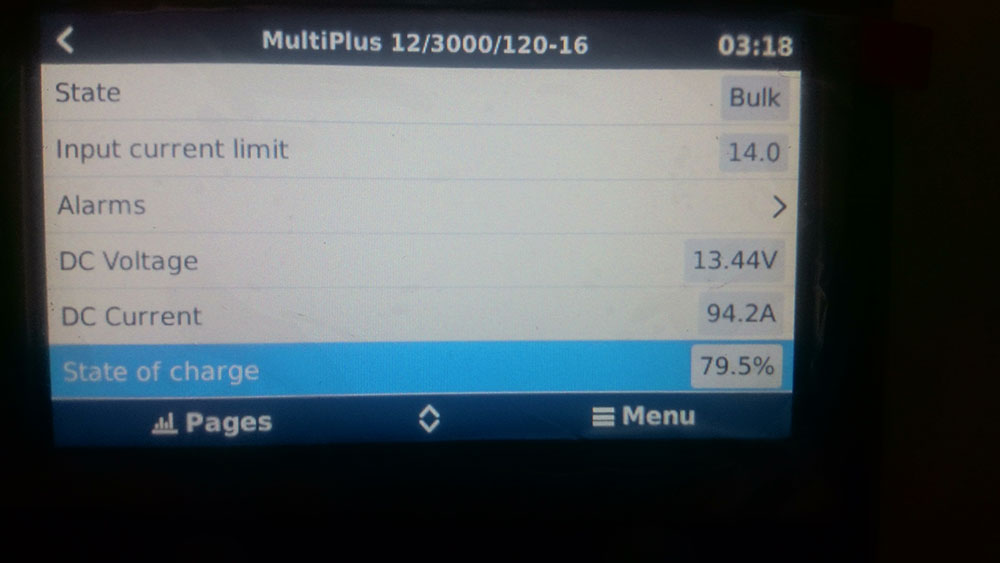 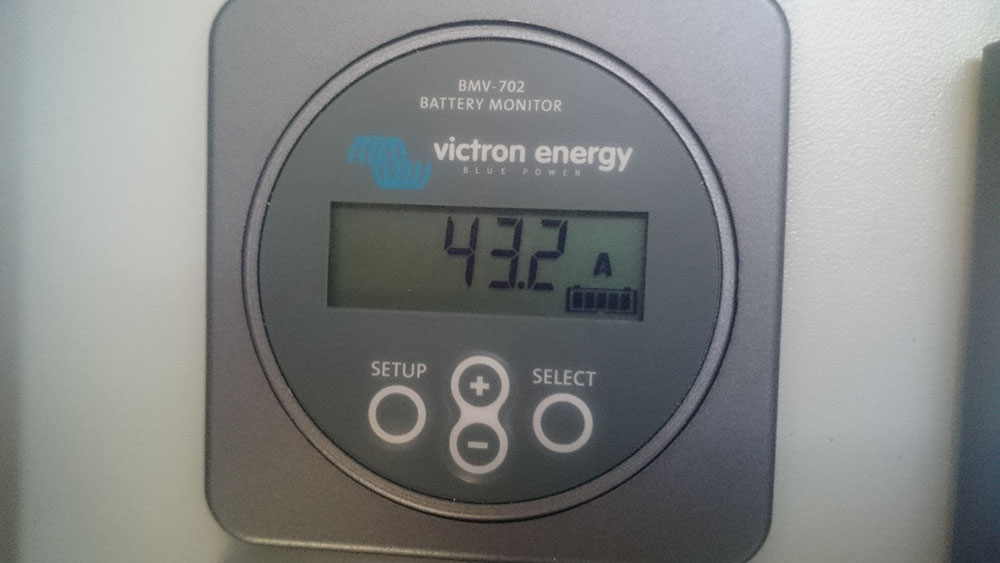 Ok, easier said than done. How do I make a firmware update on the CCGX. Consulted the website and found a procedure with an sd card for offline update. Sounded possible but just did not feel like ripping the thing out of the panel just to insert an sd card. Usb stick, ok better option, but I also wanted to configure the Multis and do not have a MK2-USB cable for that either. Only need this once .. why bother .. wrong again … I found out after reading that I can connect to the CCGX and use Configure3 to configure the Multis, but I cannot make a firmware upgrade … dhuuu.. I need the MK2-USB for that. Ok .. anyway … connect the CCGX to the Internet … Wifi-dongle, not have one .. oops.

I used two of my WiFi transceivers, configured a bridge and connected the bridge client to the CCGX. The other side is in the house amplifying the router signal. 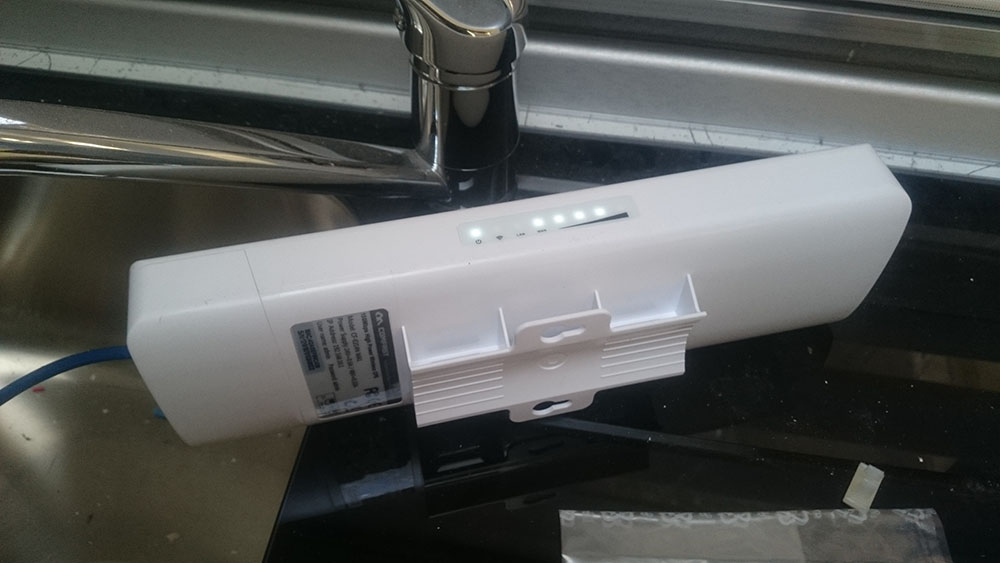 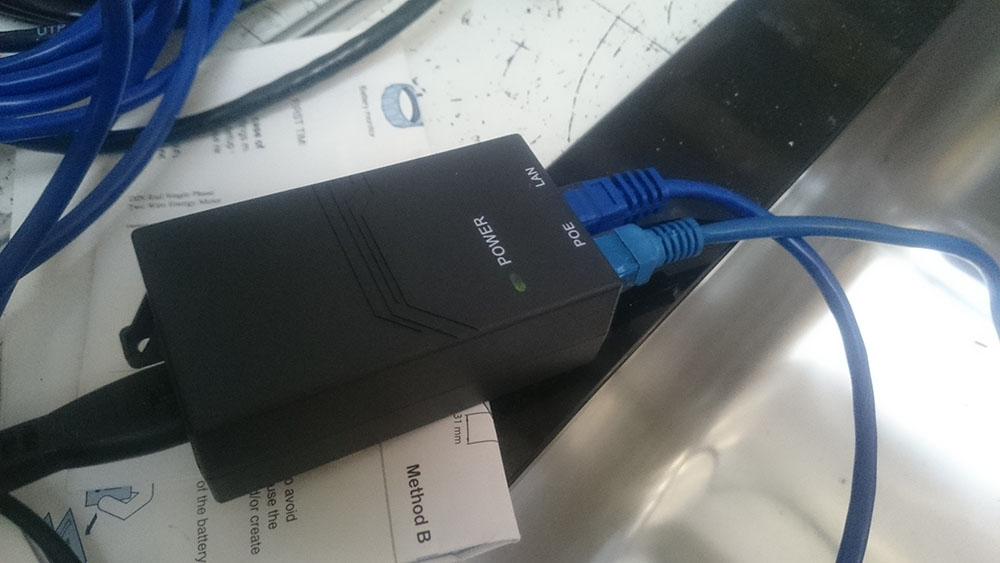 Hooked up the Wifi transmitter with PoE adapter and connected to the CCGX. 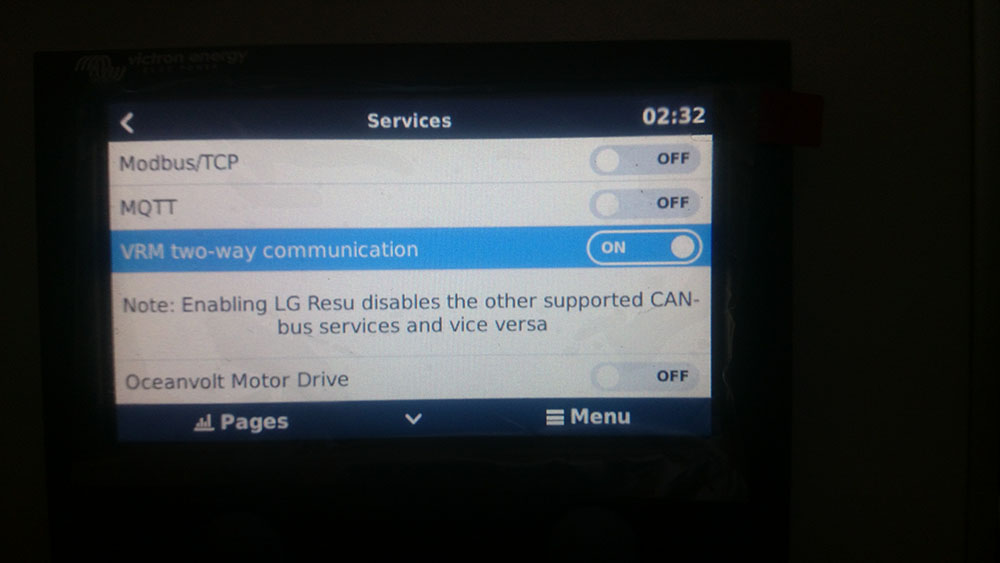 Enabled VRM, the Victron portal, on the CCGX, and as a test pinged the CCGX from the PC in my office. Worked, could reach the CCGX and the CCGX could communicate with the portal. I tested tat after I made an account with Victron VRM and created a site with the ID of my CCGX. 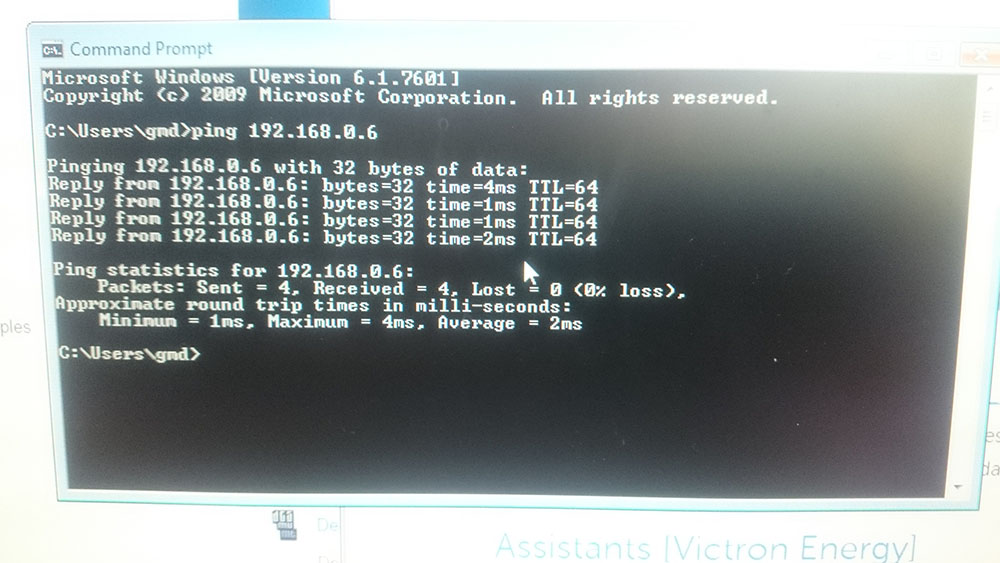 The next step was to update the firmware of the CCGX and I got 178 updates, at least this is what the CCGX showed in the settings. I had it running a while, did other things and checked again after an hour and it was done. Ok I thought latest firmware, now lets do the Multis through the settings of the VRM portal. There I found out that I can configure the Multis but could not create an assistant for my LiFePo4 BMS unless I update the firmware … dhuu again, not possible through remote configure. Need the Mk2-USB cable for that to do from the PC.

I have configured the charge voltages for my Lithiums in the Multis and the max charge current for both which is limited to 75% by default to protect smaller battery banks.

Checked the above situation again, but does not make any difference. I have more examples where the figures just don’t make sense to me  without any further explanation. I have written an email to Victron requesting a description of the displayed pages with a few other points.

Two more more observations were that the display of AC load is lagging badly behind the actual use, meaning when I switch the aircon on or off it takes a long time until I see the adjustment on the CCGX. The second one is the fact that the readings are pretty neurotic, meaning the values jump all over the place. It looked to me like hall sensors without interpolation. The usage does not jump from 800W to 300W and back to 800W within a couple of seconds. I looked at the graphs in the VRM portal based on the data my CCGX reported and it is the same, not very steady graph for a pretty steady use. I wonder how accurate the consumption figures actually are. But what do I know, the company selling hundreds of these products should know better, right ?

Well I am curious what they tell me on these subjects.