Amongst other things I have worked on the Victron installation. Finally my MK2-USB cable came to configure the Multi, but no firmware on the website. You have to write to support to have it sent. Did that, and just now came the file from the Netherlands with no answer to two questions and not a friendly word. Well .. it all fits into the picture. The MK2-USB needed an update too and did not want to work on a USB extension. The Ve-configure utility crashed twice and wrote corrupted files. With the third attempt I was able to read the file again and modify the configuration. Originally I was told by my supplier that I should configure the master/slave with software and not the dip switches, but nowhere in the software was a section to be found to configure that. Maybe it only appears when more than one Multi is found and they are not yet configured as master and slave, who knows, the documentation is pretty poor.

I also have managed to read data via Modbus/TCP but again got stuck with lack of clarity in the documentation to read the charger data. That was one of the questions not answered. So you have to go to their forum, post a question and hope that someone will answer that any time soon. I am not impressed by this sort of support. Also the multi does not allow me to set Lithium as battery type. It needs an”assistant” and my firmware does not support that. And when you have updated the firmware then you need a password for that function because you need training for this. A good written documentation would do more I guess, since my supplier also complained about lack of support and training.

Then I made a load test. Both aircon units on full, the microwave on max, the BBQ on max, the range hood on high, the fridge, the fan and both hot plates on max. 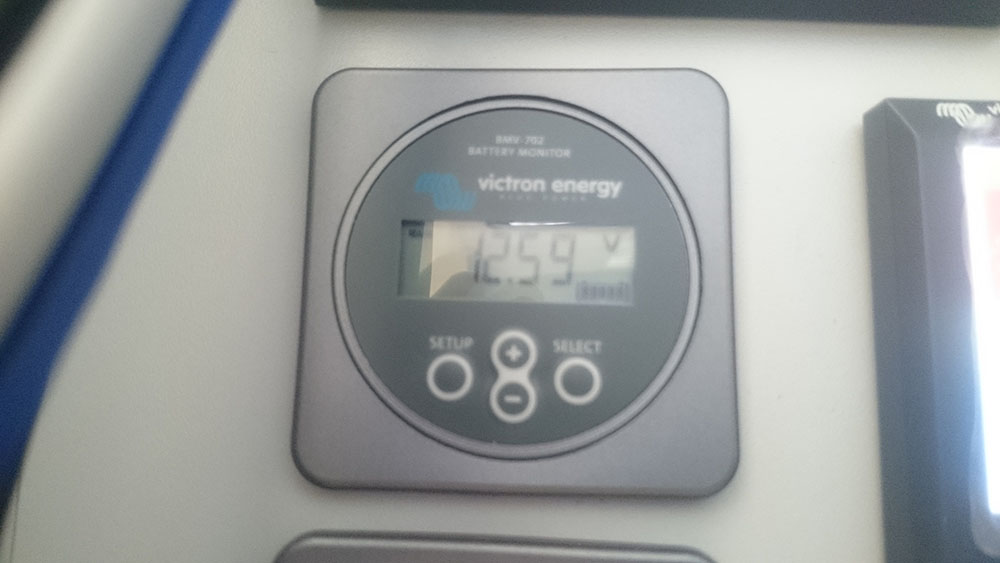 I had the input limiter to 0, meaning the inverter would not take anything from the AC in. That pushed the battery voltage down to under 12.6 and the inverter to overload. 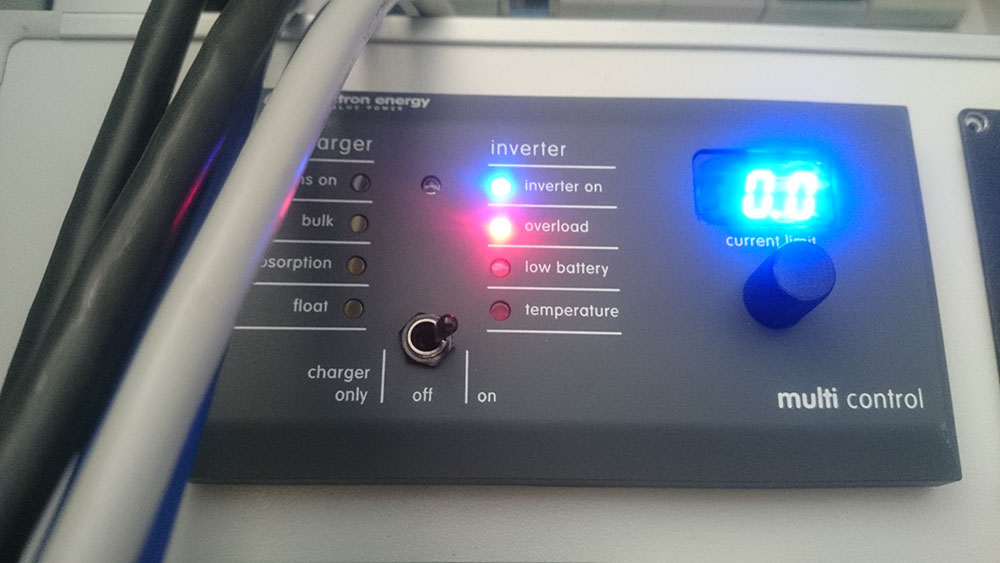 Then I quickly allowed some AC input. Belwo image shows the limiter set to 14Amps. 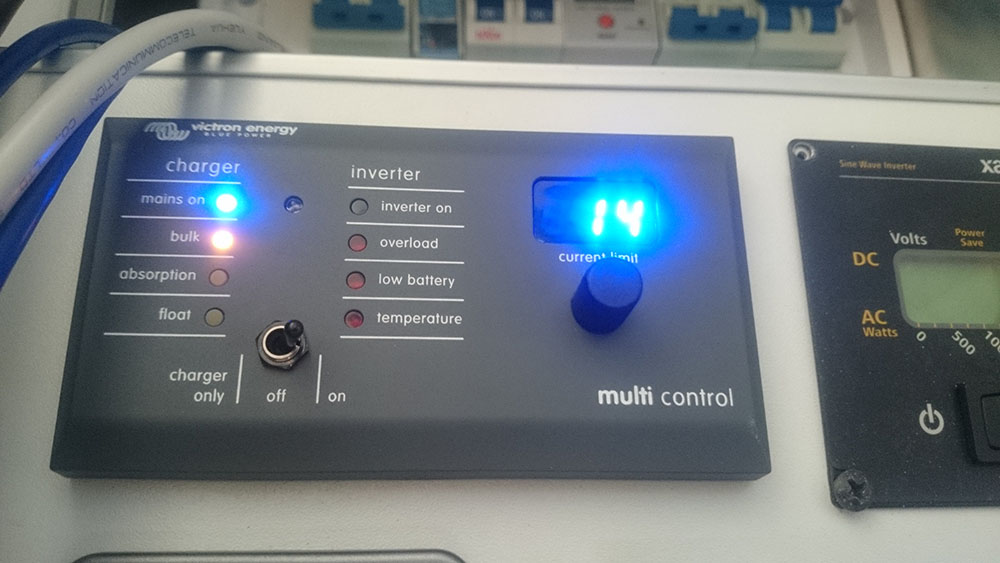 And the CCGX showing a draw of 436A from the battery but also 1442W from AC in. The number in DC Power does not make sense to me. I asked Victron for an explanation since the CCGX manual is not really what one would call a manual. The whole system need time to react when you change input limiter or loads, the lag is very noticeable especially until the inverter decides to take some AC input. 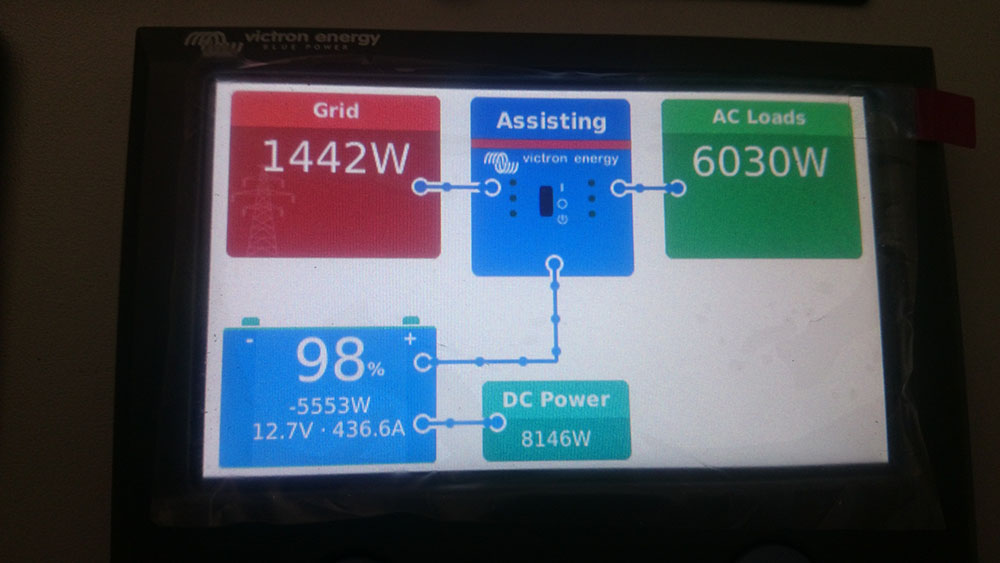 After switching all the loads off it quickly goes to bulk charge and then to absorption. I have yet to figure out the condition to go from bulk to absorption. I still see 187.5A charge current in that stage, which in my understanding is bulk. The absorption voltage is set to 13.8V, however with my new balancer I will charge higher. It is unlikely a cell will run away with 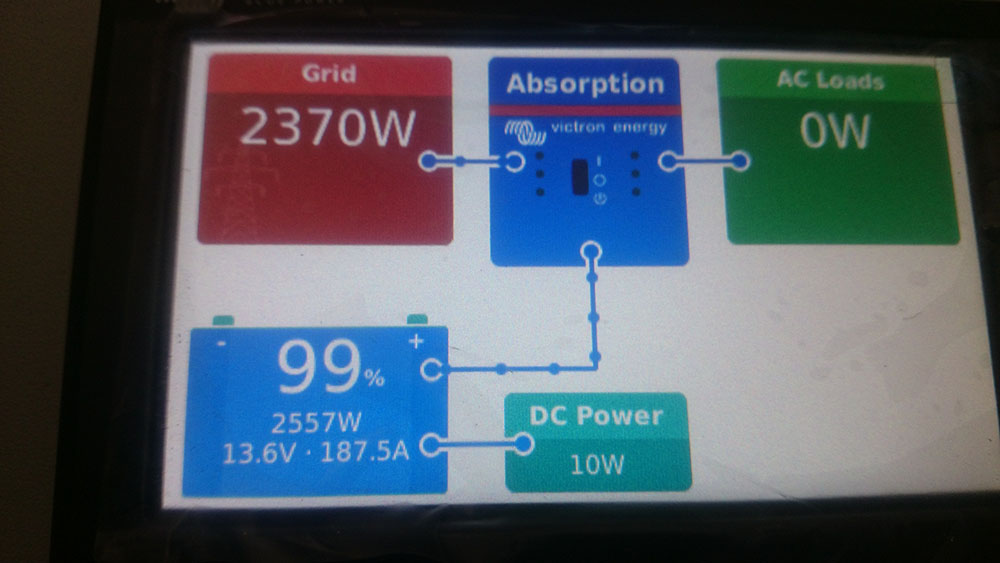 The next step was to check what the CCGX has transmitted to the VRM portal. I currently have the minimum time of 1 minute for the reporting period. The diagrams below show some data, but not really what was going on. It becomes obvious with the battery volstage and current.

In the below diagram the battery voltage never drops below 13V, however I have seen much less as in the image above. The BMV has shown 12.6 and less. Similar for the current. I have seen 400+Amps out of the battery but the diagram makes you believe it was never above 200A. This is pretty useless. I consider that a gimmick. When you want good graphical representation you want the peaks not just some random or average data. They allow transmissions only every 1 minute to reduce bandwidth, but that does not produce a decent graph. This is one of the reasons I will make my own. To reduce bandwidth one would buffer samples taken at seconds or milliseconds and not minutes and the compress the data properly and transmit that. Ok if you want some real time data I can accept a longer interval to keep bandwidth in check, but I also would like to see the “real” data.

So far the components do what they are supposed to do and they looks solid and well made, however all the things around them has lots of room for improvement.