Today I picked up all the parts for the running gear which were machined for me by George from J&L Engineering. Great man and very meticulous in his work, unlike some of the trailer places where you get told that 2mm play is good enough for a trailer.

Above pictures shows the mounting blocks with brass bushes, the suspension bolts (1.25″) with grease nipples and lock nuts. These blocks are going to be welded onto the trailing arm and are mounted onto the hanger plate with the bolts. It is a perfect fit, with less the .2mm play, just enough to get a good amount of grease into it. I was asked a few times why I don’t use polyurethane or Kevlar bushes. The Kevlar bushes I had were just not good enough in terms of fit. Far too much play. Nice and thin walls, maintenance free but just not a good fit. Polyurethane needs more wall thickness and that would have made my mounting blocks bigger (beyond the size of the tube of the trailing arm) if I wanted to keep the same amount of steel around it. Brass was the logical consequence of that design scenario and I used an off the shelf bush, just made it a bit shorter.

Some suspension mounts use round tube welded to the end of the trailing arm members or even drilled holes into the trailing arm members directly and mount the arms to the hangers. This is ok for some toy trailer especially when you see some of the welds they produce, but since I build for 4.5t with a 30% safety margin I wanted it a bit more solid. Another reason for the blocks is that I lower the mounted side of the trailing arm and have the arm working in a more horizontal angle to the chassis which makes the airbag compress and expand in a more linear motion. Other suspensions force the lower side of the airbag away from a parallel position to the upper mount plate so much so that the airbag is never compressing through the point where both plates are totally parallel. Ideally that point is around 10% – 20% above normal ride position of the trailing arm.
While I was told that the airbags can handle uneven compression and expansion without any problems, I simply don’t feel like doing that. I just goes against my common sense. Like many things are built to a certain lifespan, I feel that I rather build to the optimum life and performance of each component. It is a bit like charging your Lithiums to 100% and saying they still last 2000 cycles. I prefer 90% and 4000 cycles, the same way as I want a chassis carrying 4.5t but being capable of 6t without problems. 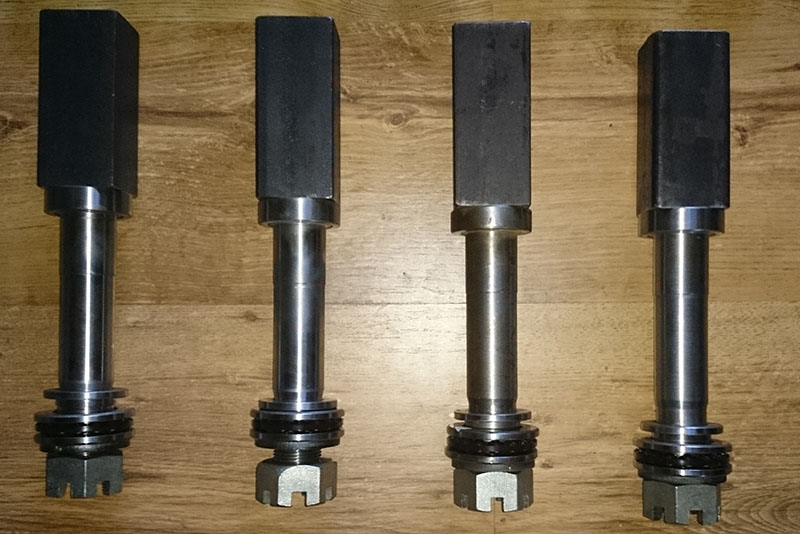 The stub axles are machined down to take the GMC hubs and the thrust bearings and washers will hold the assembly together in case the flange would break. The axle has no real function or has to bear weight. The wheel is mounted using them 100mm flange of the hub assembly. 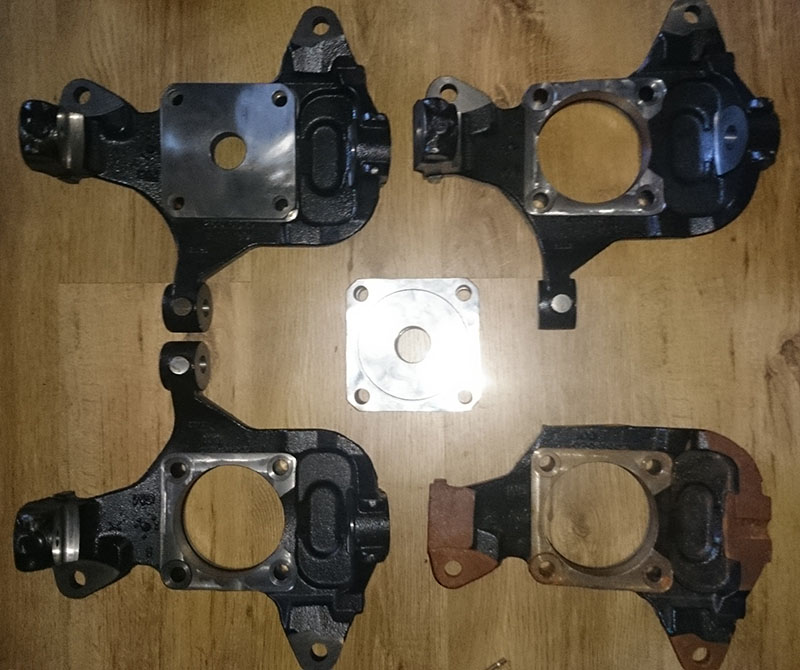 Above are the steering knuckles from my truck which I use as the mount for the caliper brackets. Bottom right is my sample with the mounts for the ball joints cut off already. One can see where the parts have been machined into a perfect plane to take the adapter plate, shown in the middle. Top left shows one adapter plate fitted. The ring on the plate makes a perfect location for the steering knuckle. The adapter is going to be welded with a bunch of gussets to the axle sleeve on the trailing arm. This is really the only major special part which was required to mount my GMC hardware to the trailing arm. Everything else is stock standard. Hubs, calipers, caliper brackets, rotors, rotor shields, hub extensions, mount bolts and even the flexible part of the brake line is all stock standard GM. This ended up a very simple and effective solution also from a cost point of view.

I will now cit back the other three steering knuckles and put some rust converter and paint on my sample and primer on the new ones.