I also have done another building block. Started yesterday evening and finished today. It is a hub for my dimmer switches.
The first image shows one dimmer switch, I also have them for under surface mount (invisible). Most of the manual light  switches are done with RF switches (radio signal from switch to controller), but I also use these illuminated dimmer switches at various locations. However they do not control any light directly – so they are not designed as “manual” switches (independent) from the central system. This hub connects up to 6 switches and converts the 2-12V output dimmer signal to 0.3-5V for the Arduino analog input. The hub output is an 8pole connector to a processor box where the dimmer signal is received an sent to the central system. I can reallocate switches and change their function as I need it.

These hubs have their own internal 12V regulated power which is also available at the 8 pin plug over a resistor divider and connected to the Arduino as reference voltage and control signal that the power to the switches is actually working. I have several feedback lines where the central system can verify if a circuit is working or not. Many feedback signals are derived from current sensors, which determine a higher load on supply lines when something is being switched on. 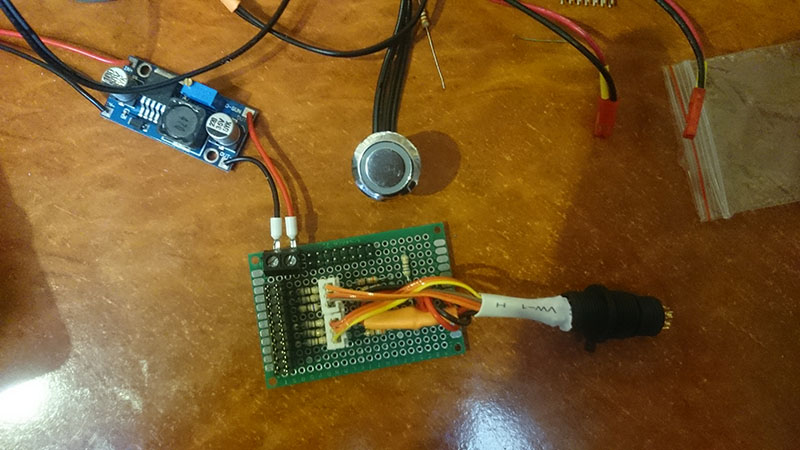 I will have 2 of these hubs for the visible switches and one for under surface switches.

Still waiting for the Ethernet panel connectors to finish the Ethernet/Can bus gateway boxes.
Also today the marker lights finally arrived. Not the small ones I had ordered, but the large ones because they said they had no stock of the small ones. You wonder why they offer them in the first place in an auction. I am not sure if I like the bigger ones, they look a bit big ..

, but maybe with the big trailer it does not matter that much.
They would definitely look out of place on a camper trailer.

Anyway, I will not think too much about it, they were cheap enough and are ADR compliant. I have slightly different priorities at the moment. Hopefully I can finish the lights tomorrow and fit the brake controller. Weather should be better for that.