Today we had finally some better weather. No rain and it warmed up a bit, so it was pleasant to work outside. I continued to bolt down the batteries. The washers had arrived a few days earlier and I put all the bolts in and fixed the batteries. They will not go anywhere in a hurry. Before they move the van will disintegrate.

Mounted the shunt for the battery monitor onto the battery casing. That is the most solid point and easy accessible. I use a 1000A shunt. The standard 500A is not sufficient for this installation. 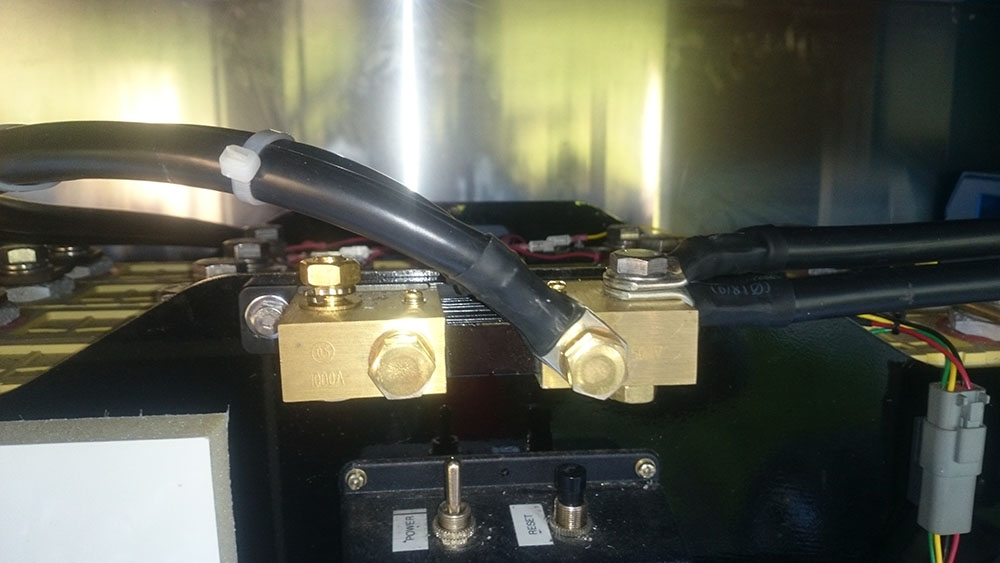 I had already made the positive bus and fitted the first fuse block for one of the inverter supply cables. Double 72 sqmm cable to both plus and minus. The fuse is a 500A to each inverter. The block cover clips in place easily. 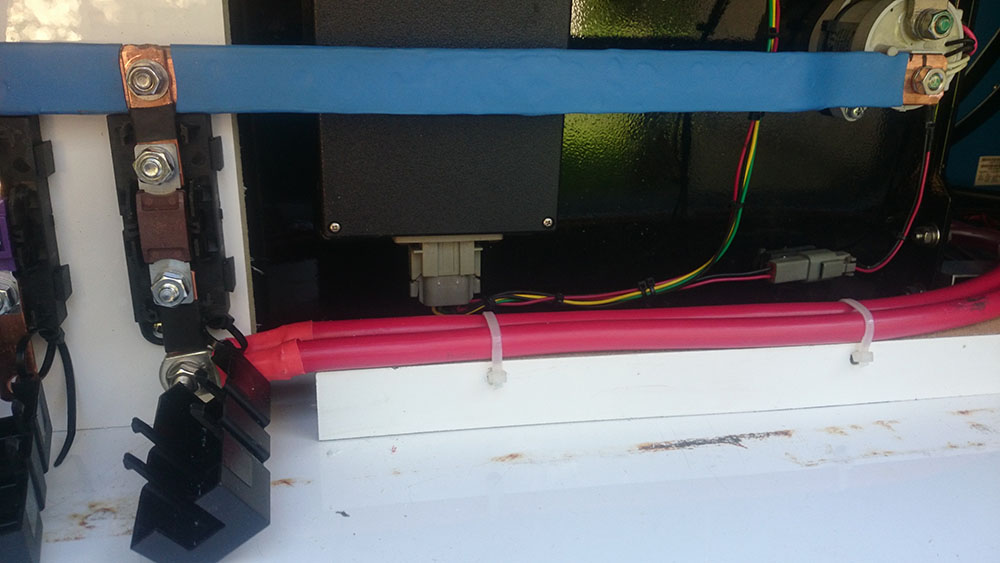 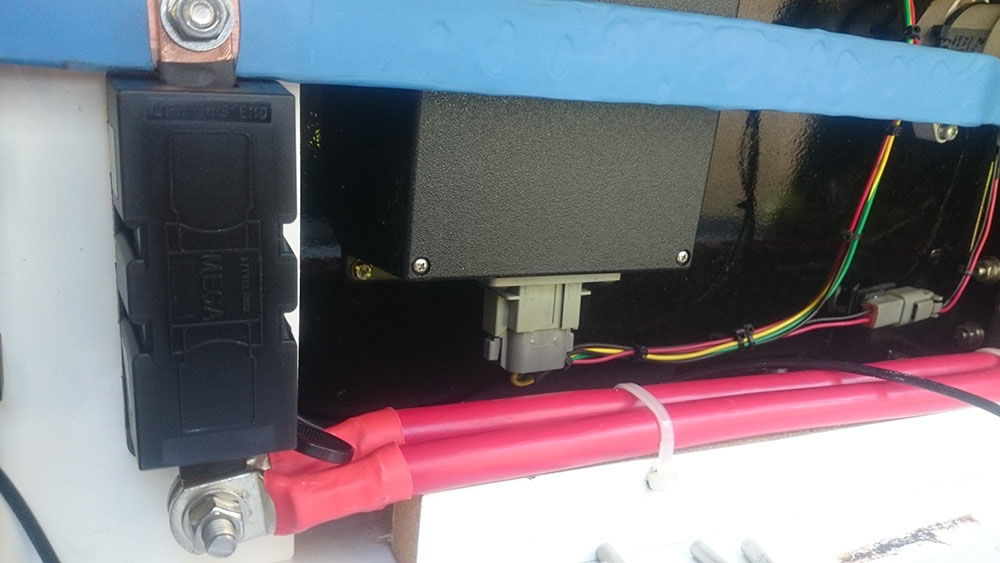 Next I fitted the other fuse blocks. I still had to make a few of the joiners from the flat copper bar to complete the other 4 fuses and blocks. Two fuses for the two large inverters, one fuse (400A) for the internal 12V into the van and 2 blocks with 175A for the 2 solar chargers. The minus cables for the last three have not been fitted yet to the shunt, neither has been the minus connection to the batteries. 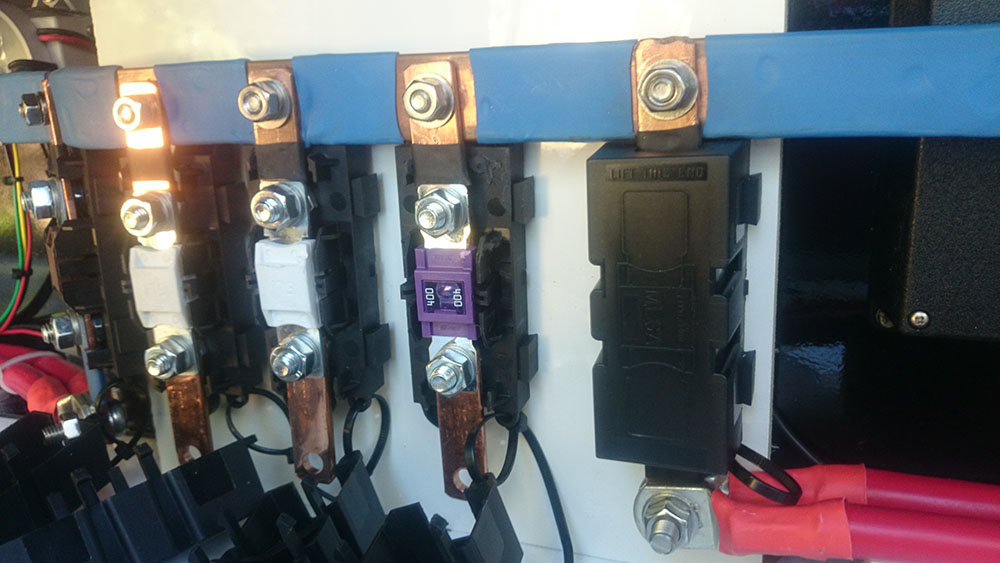 Next step was to fit the temperature sensors into the fuse blocks. With 4 screw connections in such a short distance it is possible that the contact areas will heat up with large current draws and the sensors will detect that. 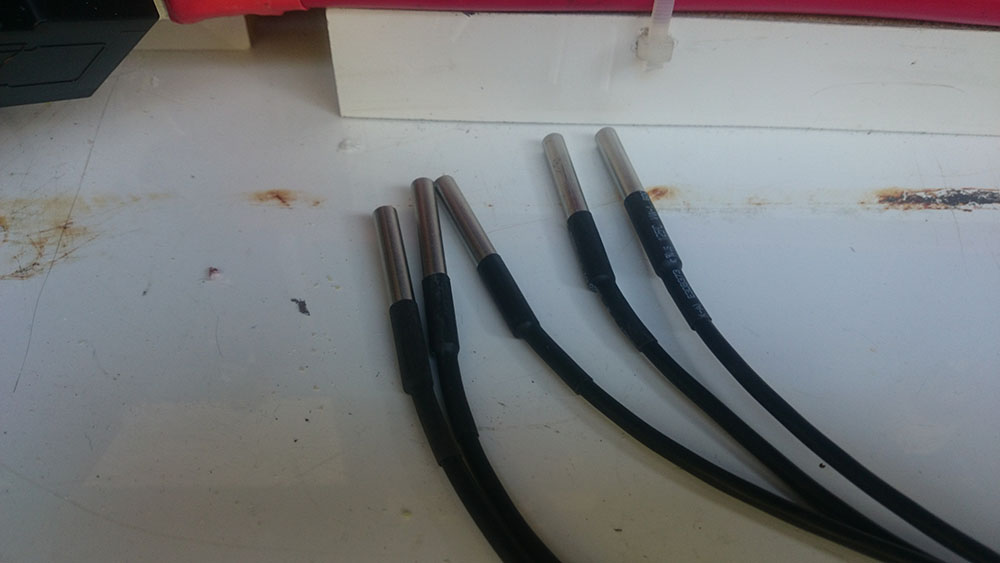 These are digital temperature sensors connected via the One-Wire bus. They are cheap, one dollar each, so it is not really a problem to add such a safety feature. It is a bit overkill for the solar charger inputs, but since I place an Arduino module there to read the three supply lines the extra two are not much effort. The module is connected to the central system, which can read each temperature. I might put a little LCD display, something like a 32 character display, into the reader component with a push button to avoid unnecessary standby currents. With component prices as they are this is not really a big deal. 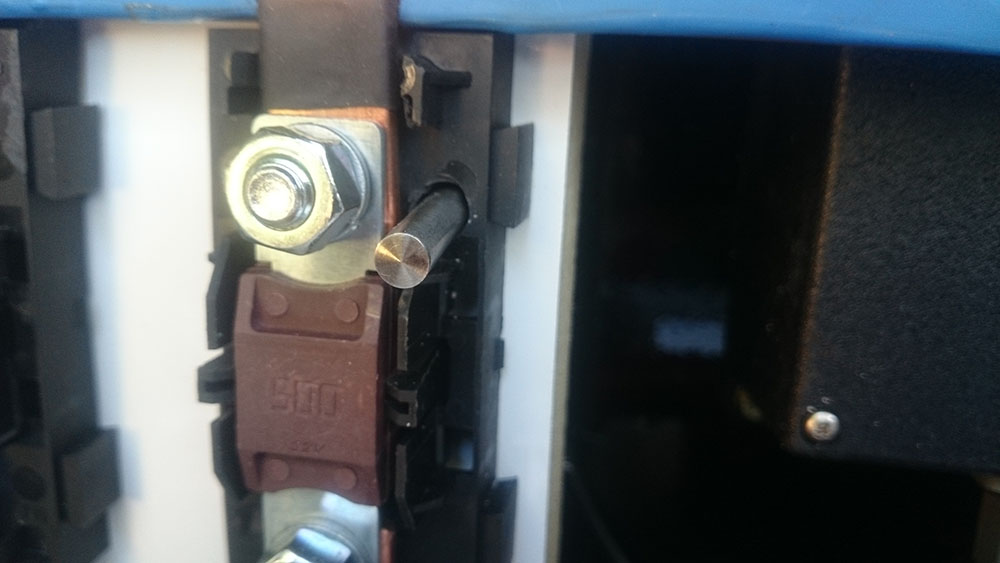 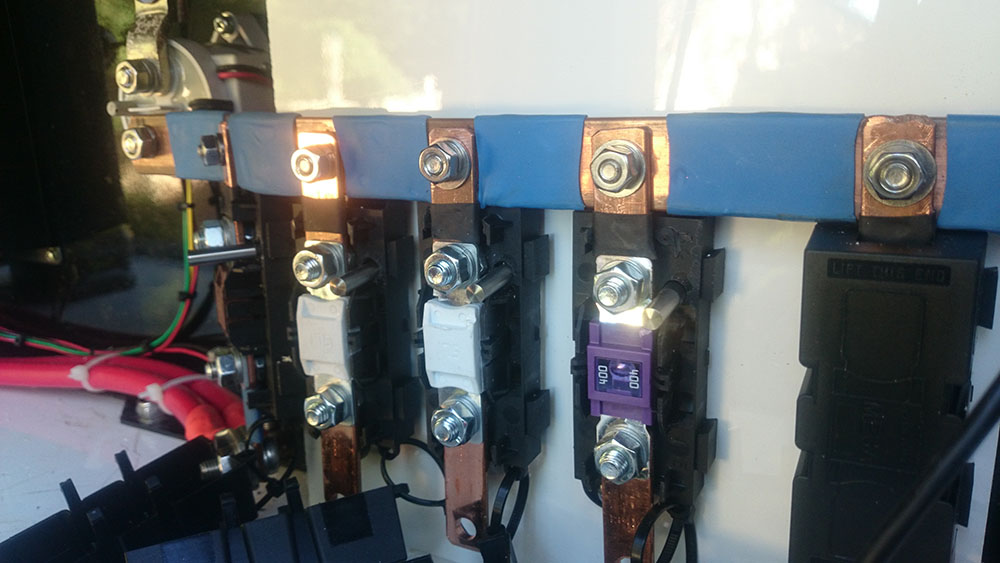 The image below shows the cables of the sensors coming from behind the mounting board. The reader component box will be mounted above the fuse blocks. 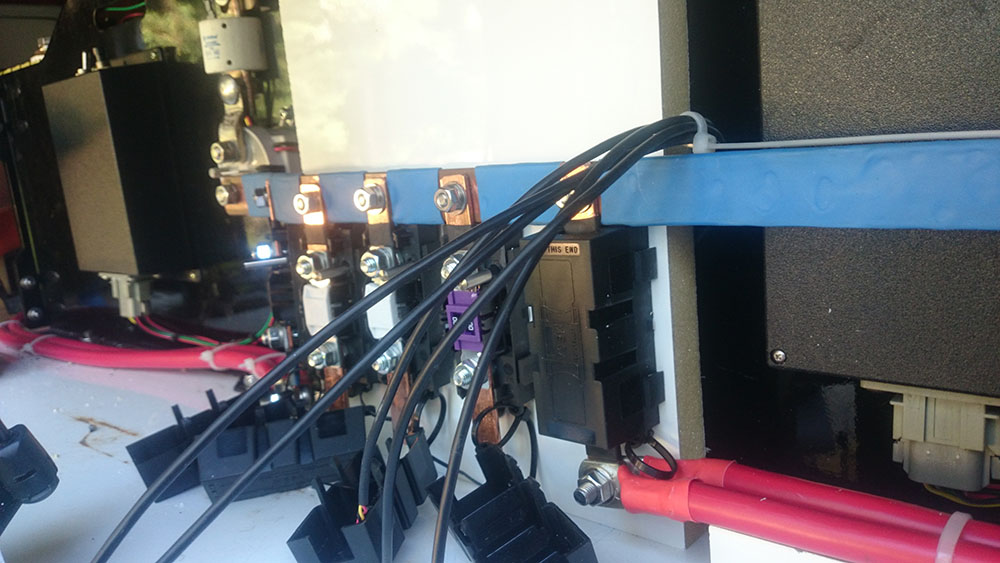 The image below shows all fuse blocks closed, the middle three connections are not yet finished. The inverter supply cables are connected. 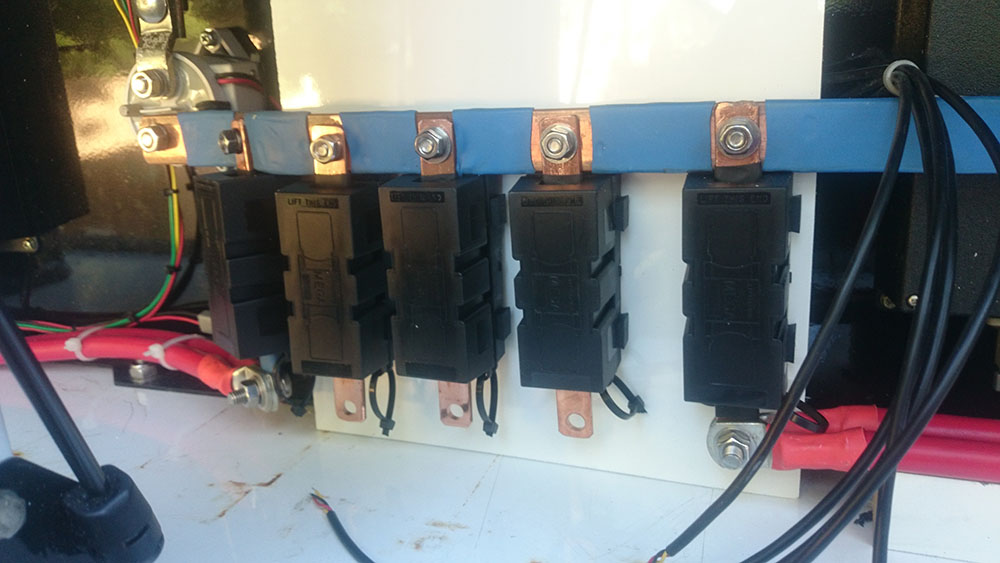 Before I went back to do some more work in the office I mounted one side of the shelfs in my work area. The trim is on with a lip above the board to prevent items from sliding off. The other side still needs to have the trim fitted. 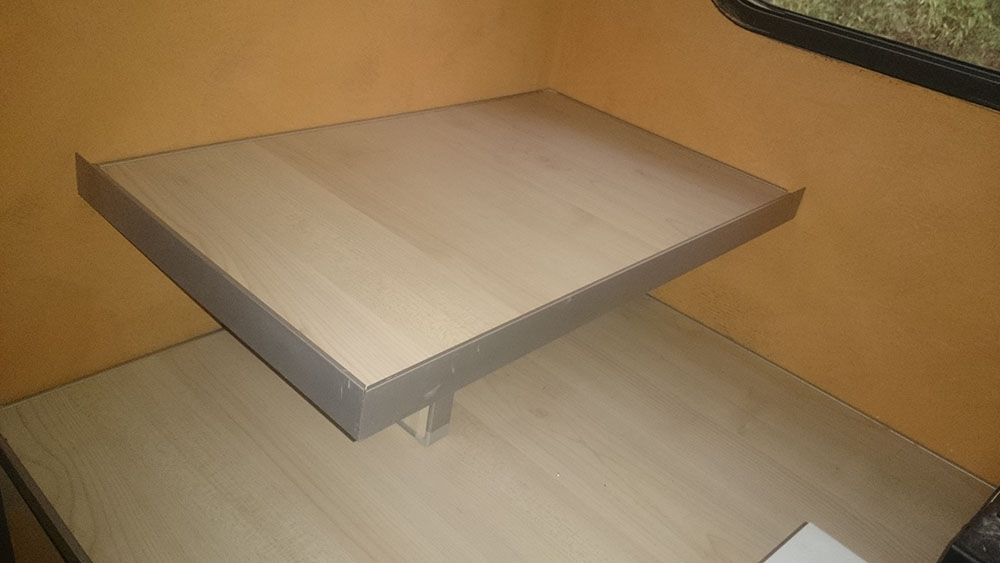 Will continue inside when the weather gets bad again.