Today I finally mounted the Anderson plug in the tub to connect power to the trailer battery.

The Anderson is rather primitive for that application since it does not contain any mechanism to clamp the insulation of the cable and all the weight and pull of the cable is hanging on the crimp contacts.

Not a great solution in general and not really good in my case. I thought about those 3 phase plugs with screw ring, but they are just too bulky. So I made my own clamp with “quick release”. not crash hot but it does work .. loosen the ring nut on one side flip the brace to the side and the cable can be removed. I will have to do something more elegant on the van side, because there I have the same problem although not as severe as on the tub side because the cable direction is different and the pull on the contacts not as severe. I mean the problem is caused mainly by the heavy duty suzi coil. if
I would use just an ordinary piece of cable it would not be as much of an issue. But ultimately the suzi coil is safer especially with stuff loaded in the tub which might lock the loose cable if something moves.

Below is a pic of the DirectLink controller before I tucked it away behind the center console.
I use a Y connector for the OBDII port, so I don’t have to remove the brake controller when I hook upmy diagnostic computer. The free end is shown also in the pic with the diagnostic computer on the floor,just a corner of the screen is still visible. I still have some wiring to do in the vehicle, but that will be later. 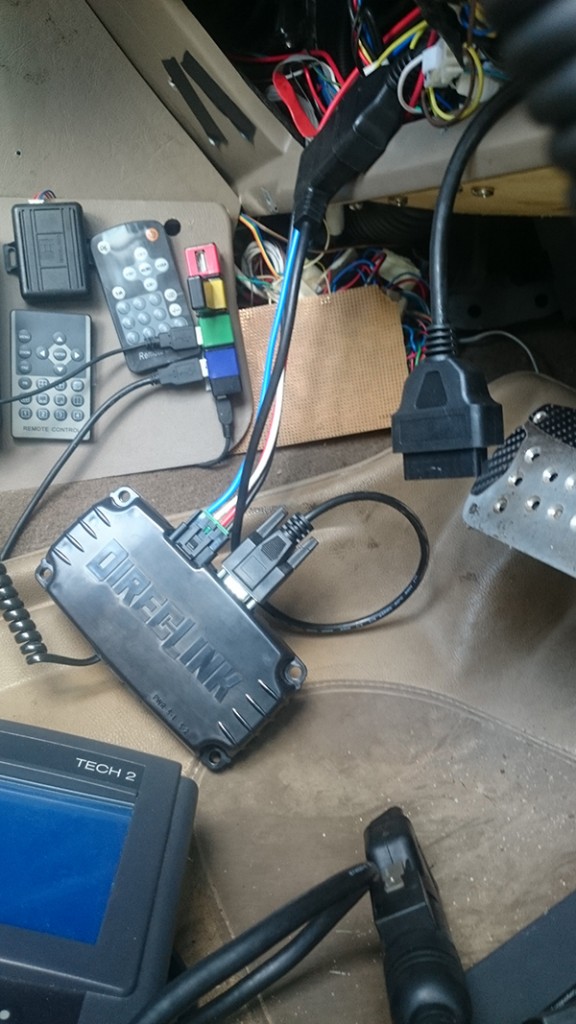 I checked the various diagnostic screens of the brake controller, especially all the ABS monitor screens to make sure everything is working as intended before I go to the weigh bridge on Wednesday. The ABS sensors show OK, but I have to wait and see if the calibration works properly. The vehicle and trailer has to go 40mph for that to occur. I am not using the brake sensors from Tuson but the original ones from GM, the same as my truck. So far everything looks like it would work. We will see.

I also finished the compliance plates, just have to add the tare on Wednesday. Not worked on the tanks today.