Work Slide-Out Is In

Work Slide-Out Is In

Before I could insert the slide-out box into the opening, it had to be prepared. Plastic cups are fitted bottom left and right to keep any water out which may run in through the slide mechanism. It would me minimal, nevertheless the plastic piece prevents the water from running inside. Bottom and top width are cover with a wipe seal. 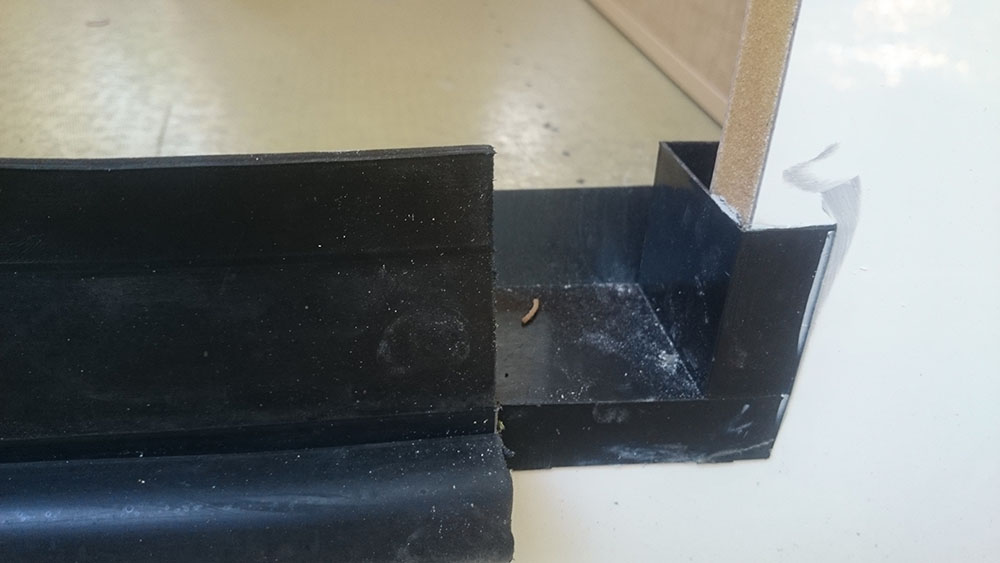 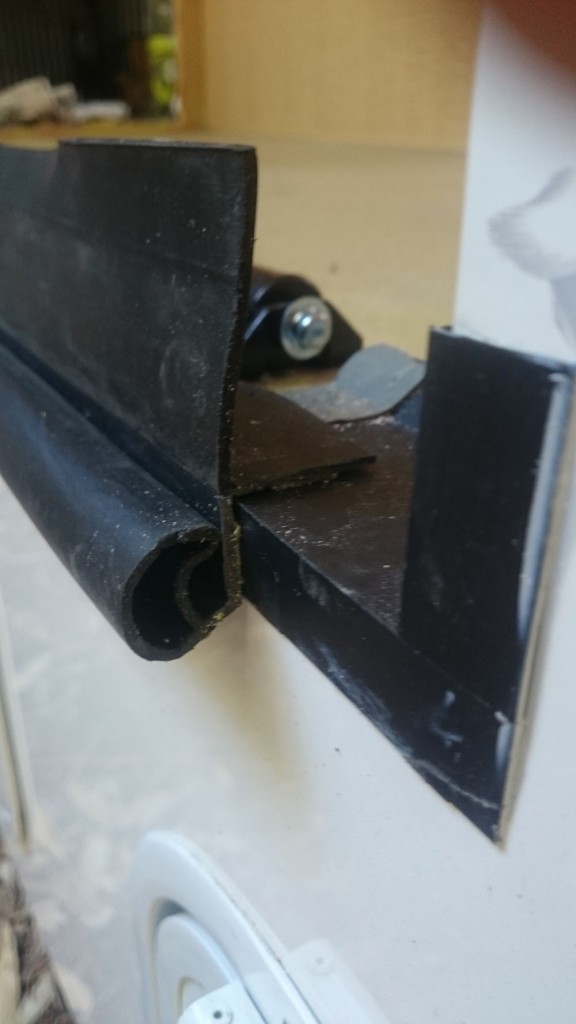 The wipe seal also has a bulb seal attached. The intent is to seal the top and bottom when the slide-out is in, however it is only top and bottom and not left and right. The left and right side also over covered with a wipe seal but no bulb seal. This is the original configuration as per manufacturers description and it turned out to be totally useless for my application on several levels.

The images above show the wipe seal at the bottom and the rollers on which the box rolls in and out. 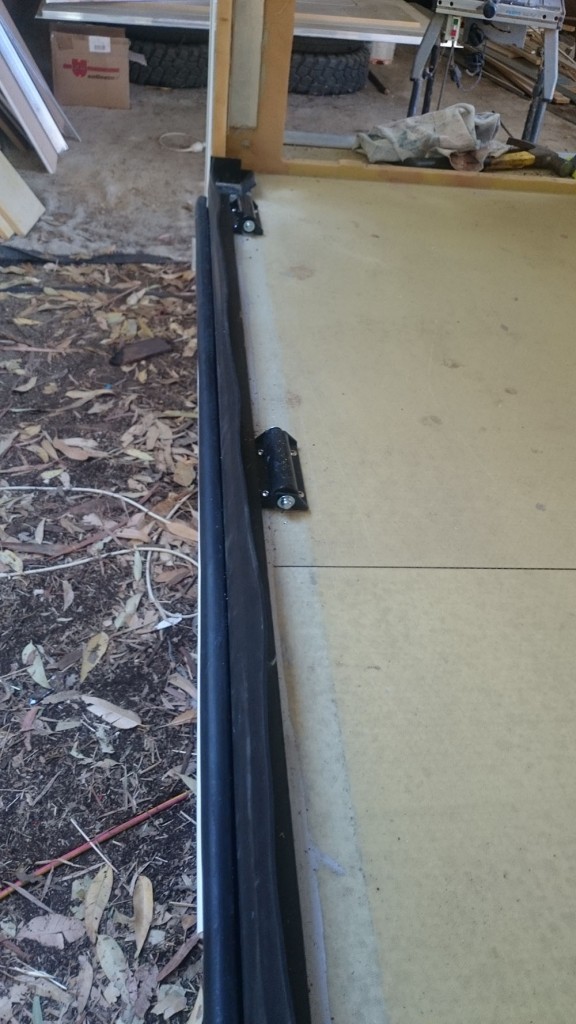 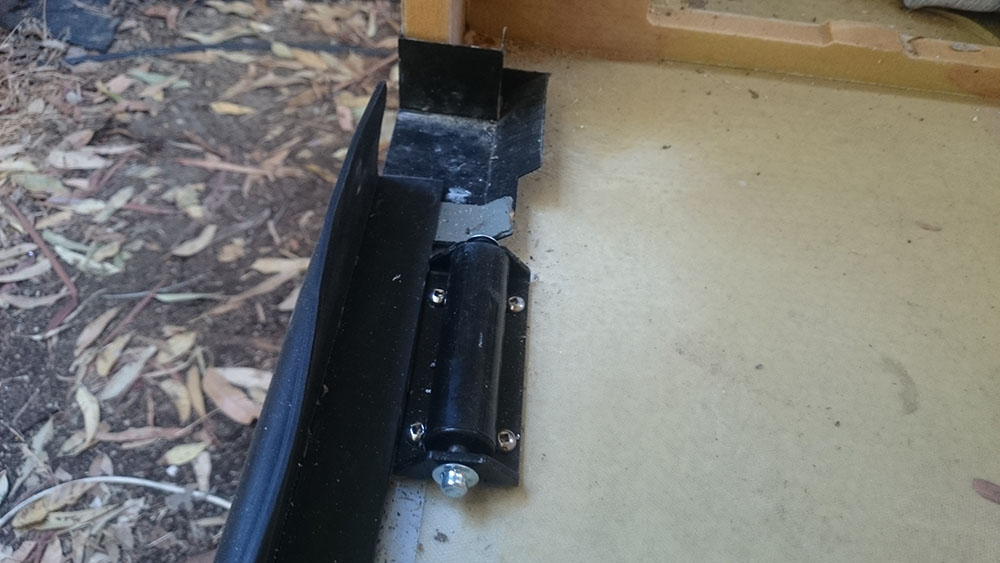 After finishing all the preparations as per instructions, except the sealant on the vertical side angles (I wanted to dry fit first) we inserted the box. I encountered several issues. At the top right the gap between the box and the seal was not big enough to take the angle and the screws. The box did not go in all the way. Next problem was that the controller does not stop when the slide-out is running against the body because the stall force they is as a threshold for the motor to stop is way too high. They have an adjustment poti which is covered with a sticker, but it turned out to be useless. The minimal stall force is still way too high for my application. I assume they use a certain current value and not just a current difference between “normal” operation and stall. The only way for me to fix this with the existing controller is to place a block on the track to stall the motor and make it stop. Pretty brutal method. The tracks also run pretty rough. All in all it is a cheap but quite mediocre mechanism. The controller also lets the box still move a few millimetre even if one release the switch. Very rudimentary. Considering that this concept and product is used by Jayco, I’d say it fits in the picture I have of these products. 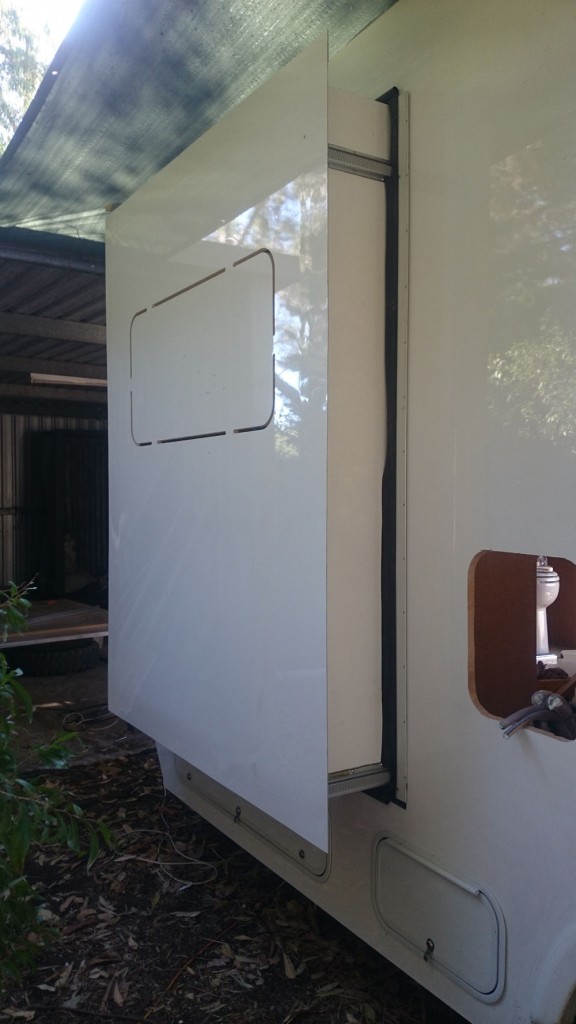 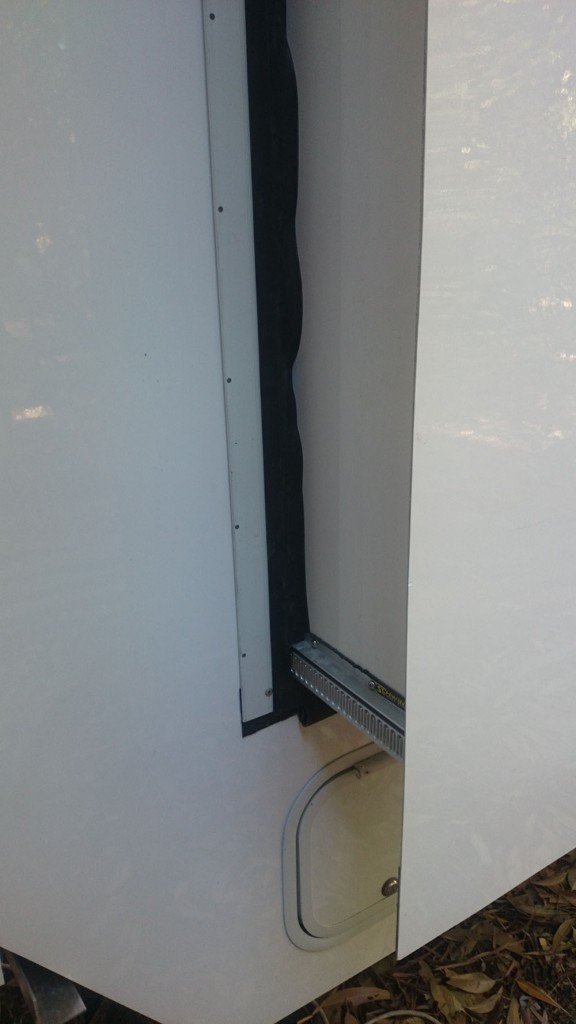 The image below shows the slide-out fully retracted and the corners rounded for the outline seal. 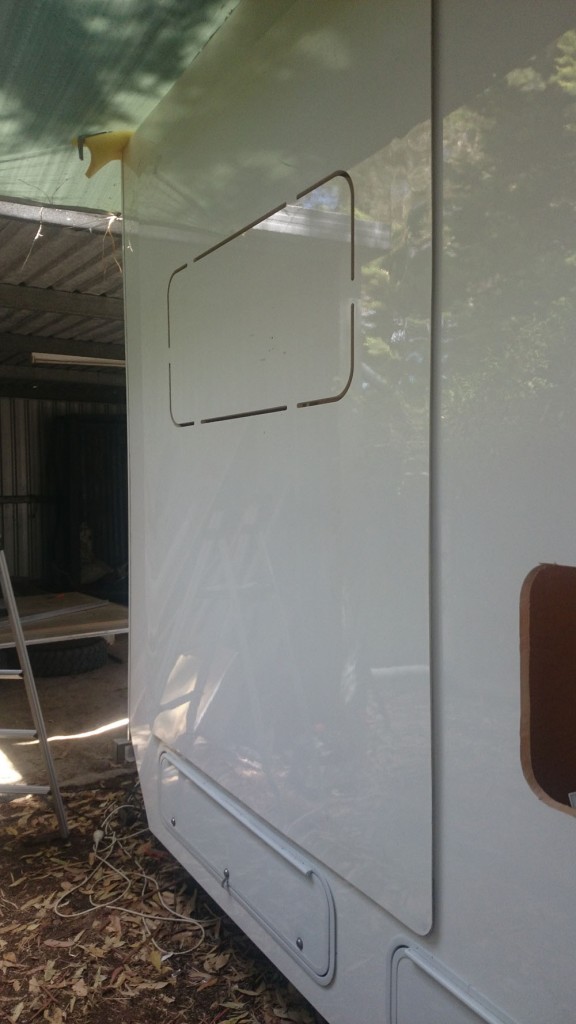 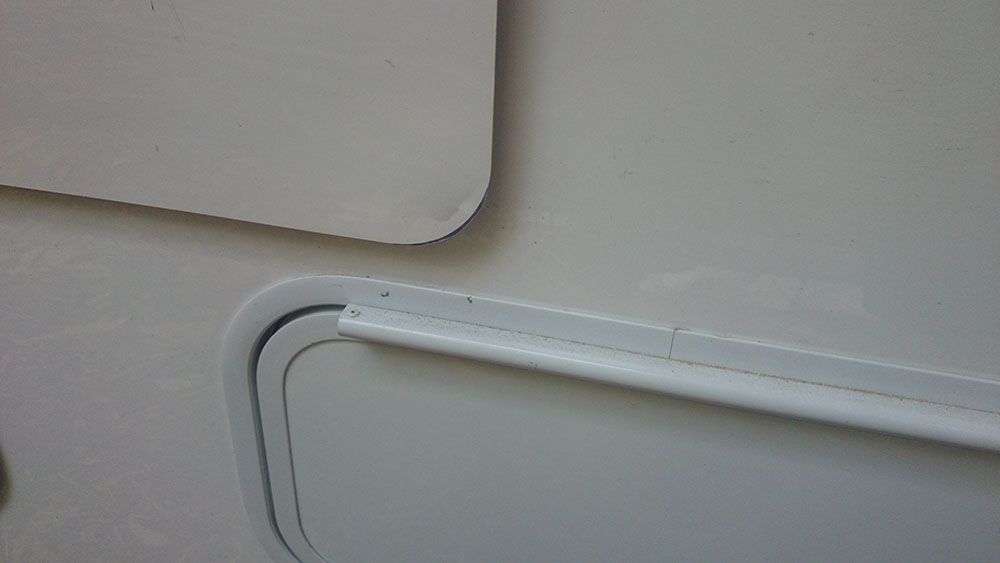 The bulb seal at the top and bottom was way too big and prevented the slide-out from retracting closely to the body. An ugly gap remained on the left and right. Because I am not using a massive extrusion as a frame for the box I needed another solution. They probably use larger slides with higher current normally than mine and want the outer frame to press hard against the body. Made with force instead of precision.

I removed the bulb seal from the top and bottom and left only the wipe seal and now the box retracts nicely. Then I put my outline seal with a smaller bulb seal around the outside edge and this closes all around evenly and beautifully. 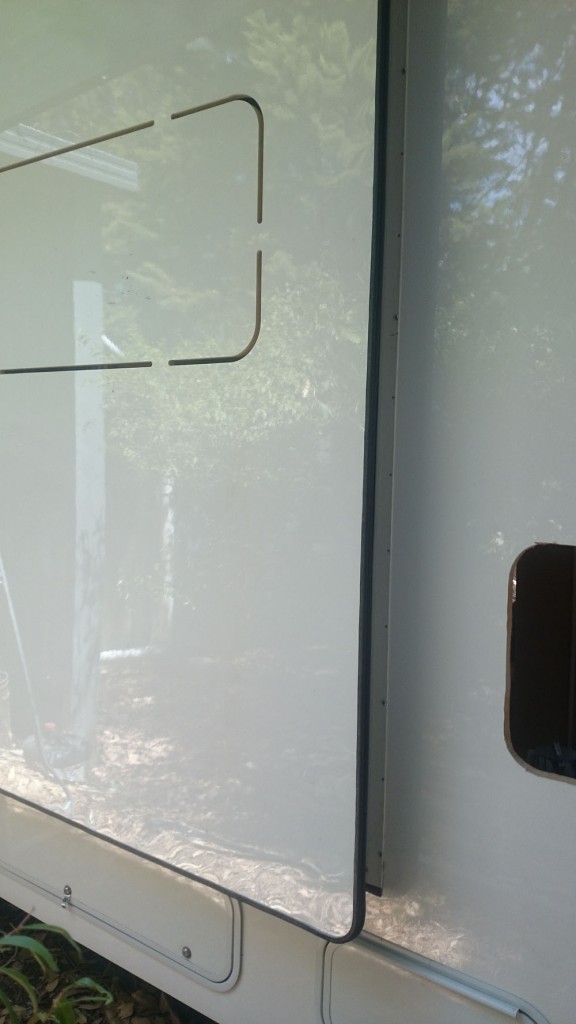 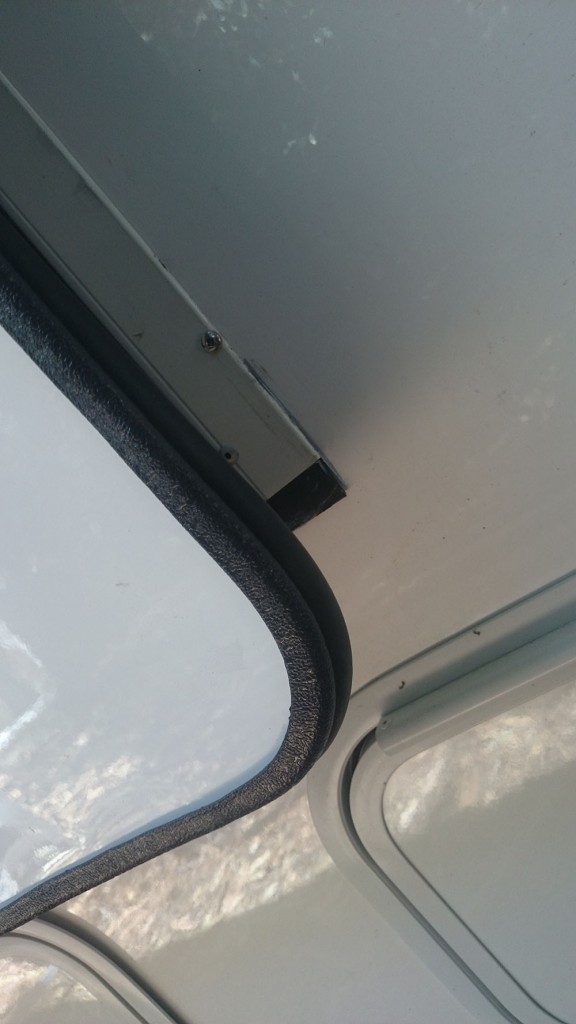 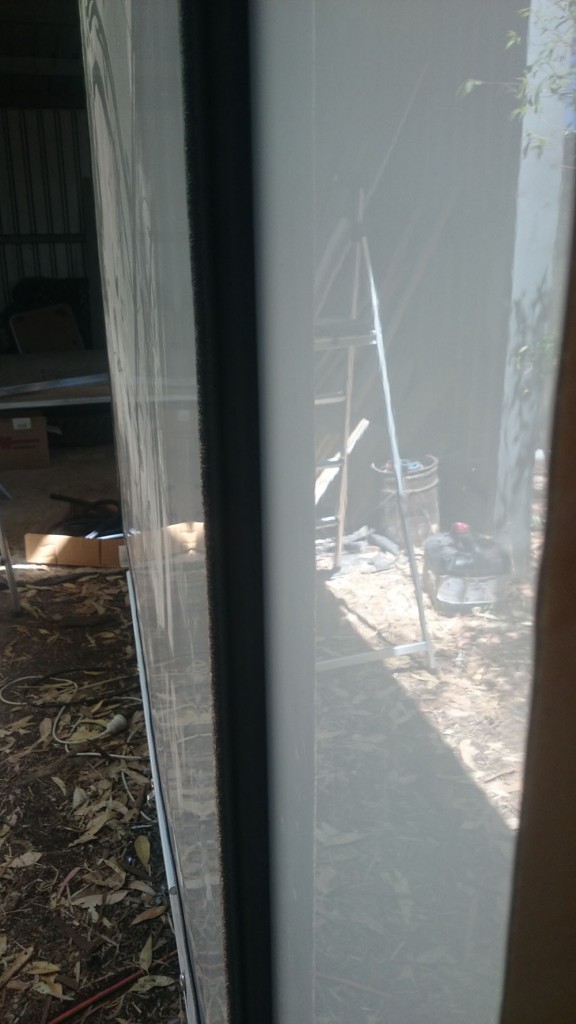 The slide-out only protrudes 15mm from the body and the appearance is exactly as I wanted it. Looks very clean and streamlined. I now have to solve the stall force problem. I am quite certain that I will end up with my own controller for the slide out with more flexibility of adjusting outside and inside stall forces  for the motors. It is not really rocket science. The motors of this mechanism (Lippert – Schwinteck) have 5 wires, 2 for the motor itself and 3 for the hall sensor delivering the current reading for the controller. I personally will do this differently. I will measure the current at the controller and not at the motor because this will be more reliable and not depending on cable length between the controller and the motors. Tomorrow I will hook up my scope and check the motor signals because the way the motors sound I assume a PWM signal as for motor control. I have a couple of shields for driving motors and it should be pretty simple to make a little controller with a few more features than this piece of work. I am really not impressed by the quality of the US electronics I had so far. The levelling system turned out to be pretty useless and now the slide-out controllers.  Well, I will live with it and try to make the best out of it, nevertheless the mechanism as such is easy to install and is light weight, which was one of the main reasons I decided to use this component.

The next step is to seal the left and right mounting angle, fix the cables inside and decide on a spot for the manual switch.