This week we had several very hot days and as a result I did not do much outside. Office work and done some work on the work area slide-out early in the mornings.

The most level surface I have right now is the van itself. I decided to build the slide-out box for the work area inside the van because it would be the best place to get in nice and square.

The face panel was cut with the CNC router in QLD and I had already removed the glass and the foam from the rebate around the outside. Cutting the bottom, top and side panels was a little bit of a challenge with my small circular table saw. I had panels with at least one or two clean edges from the router or the large table saw at Vanglass and I used those edges for the ones to be joined and glued with the face. The other edges were cut on the small saw after measuring and marking them individually. I do not have the ability to use a guide for the large panels, so I have to try my best with free hand sawing. I have a Festo saw and also have a guide for it, but since it is fairly old it is really hard to get in and out of the table. I decided to leave it in the table and guide the material manually. 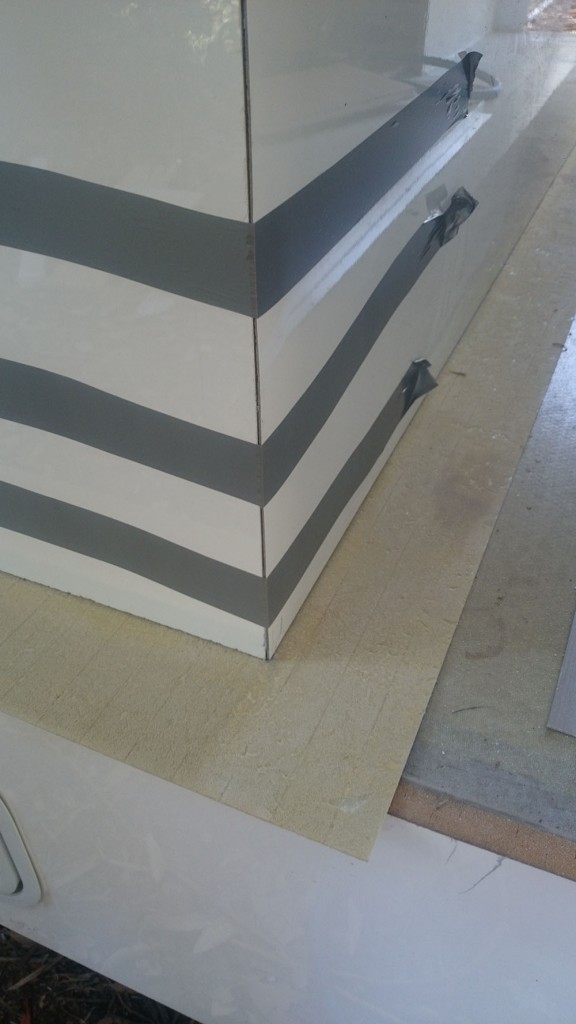 Despite the handicap of the small saw I achieved good results the joined edges. I rebated the side panels and glued them to the top and bottom, braced with tape until the glue cured. Inside the box I used angles to brace the panels and make sure they are really perpendicular to the face and nicely squared up. 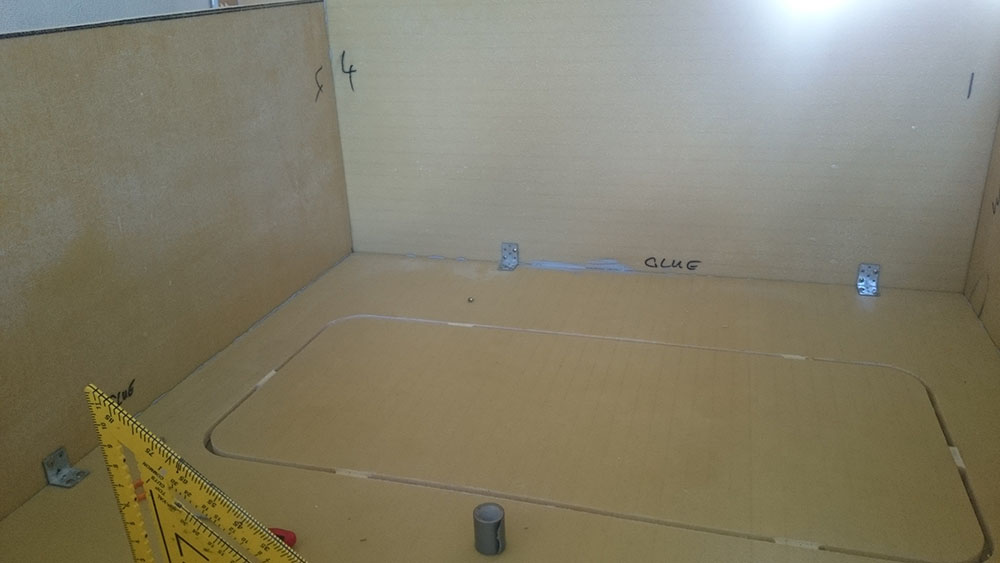 The next step after glueing the box was to cut and fit the angle to enforce the fibre glass skin which represents the frame of the slide-out and will cover the mechanism and seal the slide-out when retracted.  The image below shows the angle dry fitted. I overlap the angle at the corners and did not mitre cut the angle for additional stability. The angle is made from cool room channel which I selected, because it was the only profile from which I could make an uneven angle with 100mm width on one side and only 1.5mm thickness to save weight. 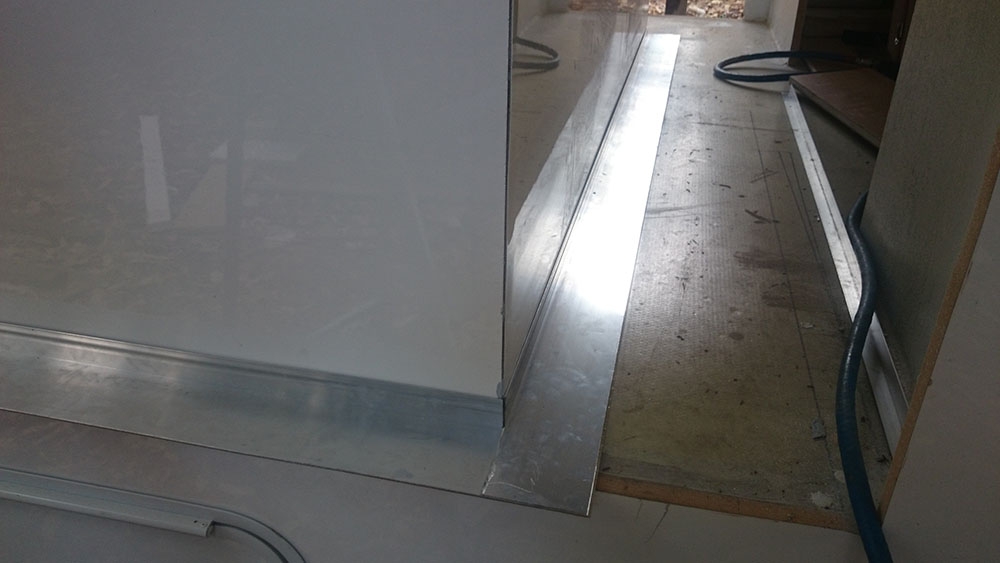 The image below shows the channel, which I cut to length with a drop saw and then cut to the desired width with my circular saw and a metal saw blade. This results in a 100x38x1.5 mm angle which is perfect for this application. I did not find anything in that size readily available. The extrusion used by some manufacturers are too heavy and expensive for my taste and I did not like the look of these profiles. I prefer the smoother look of the fibre glass face with just a small edging seal around it. 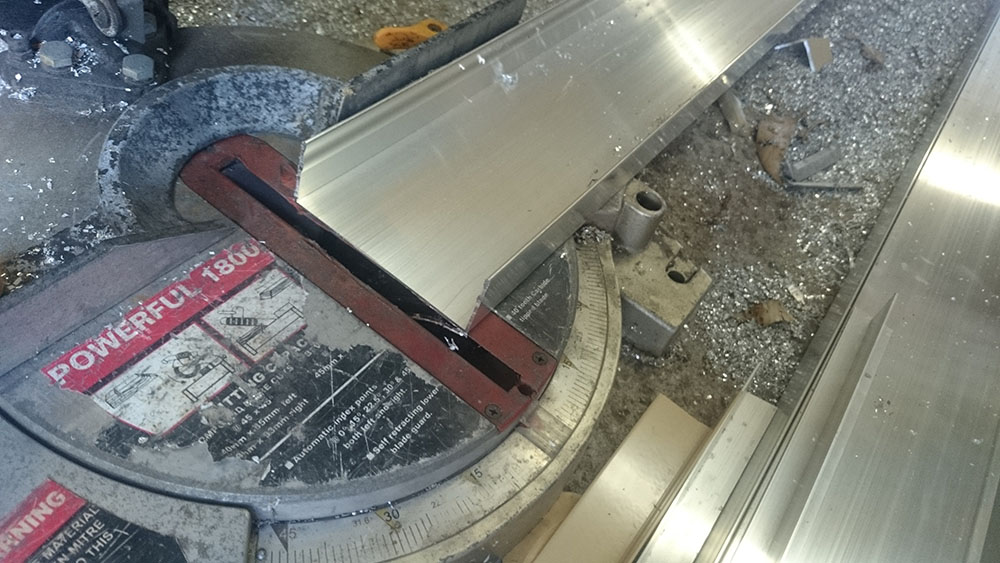 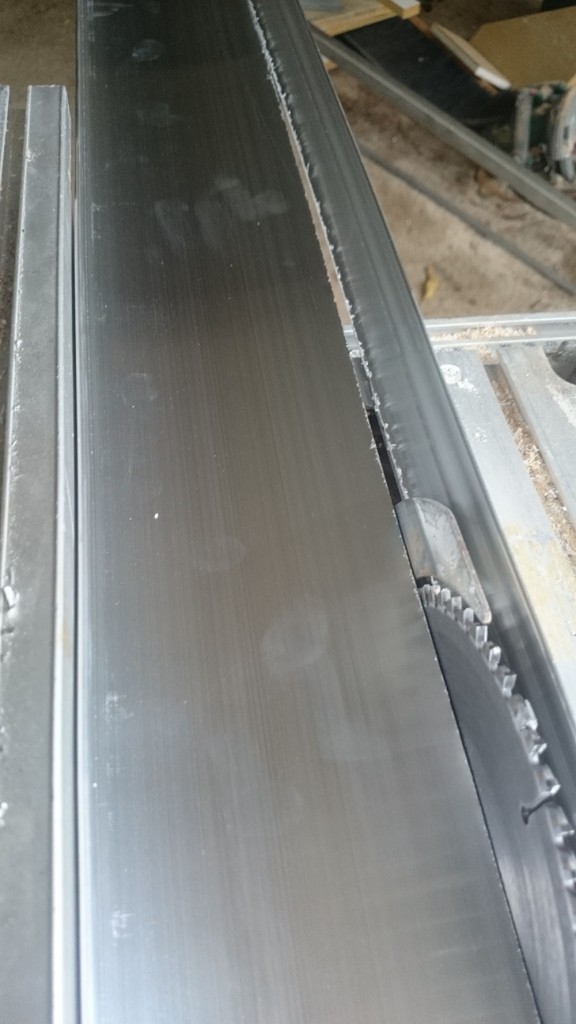 In the next step I dry fitted the slide-out mechanisms in the wall cut out and measured the distance between the rails to compare with the actual width of the box. 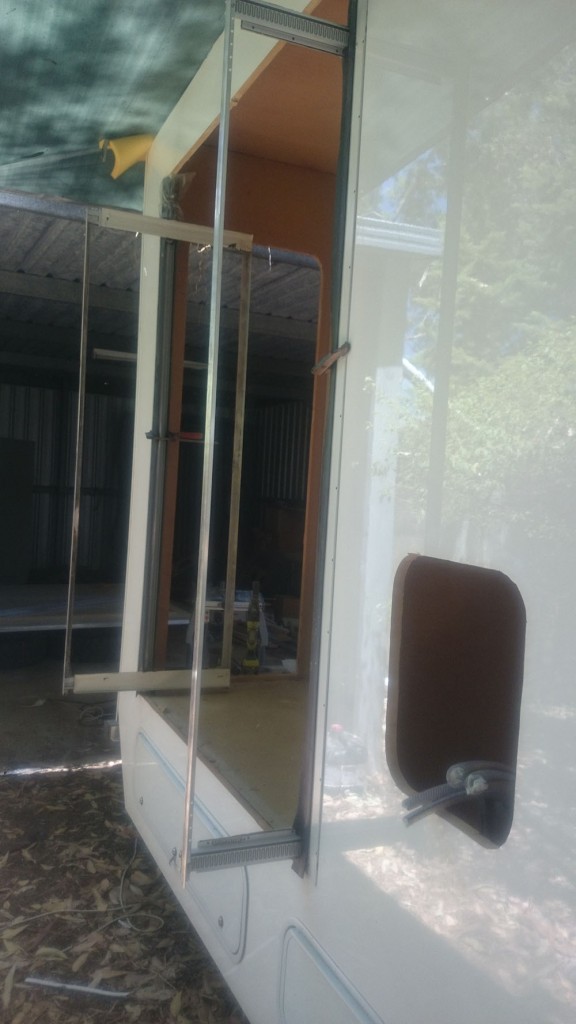 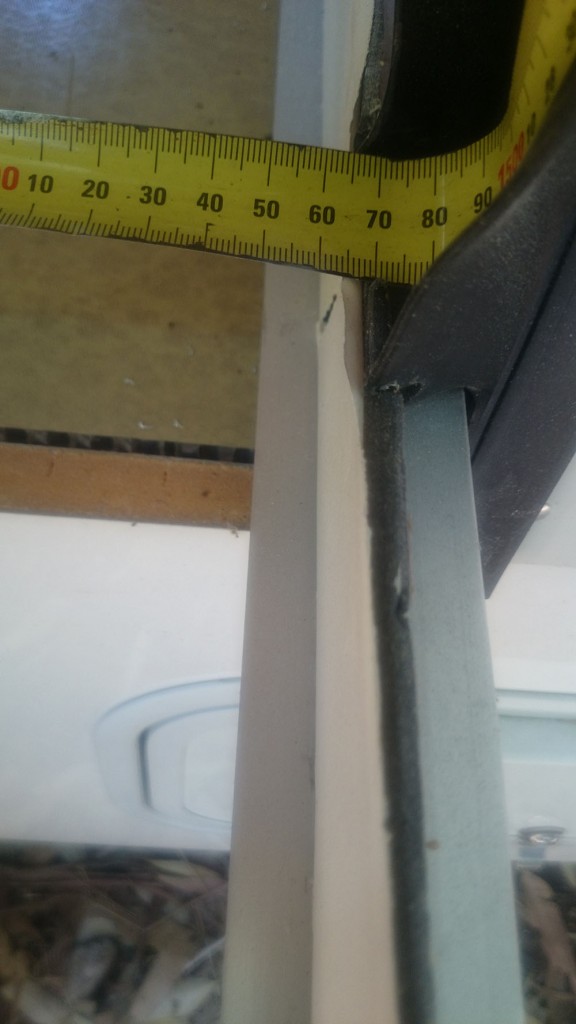 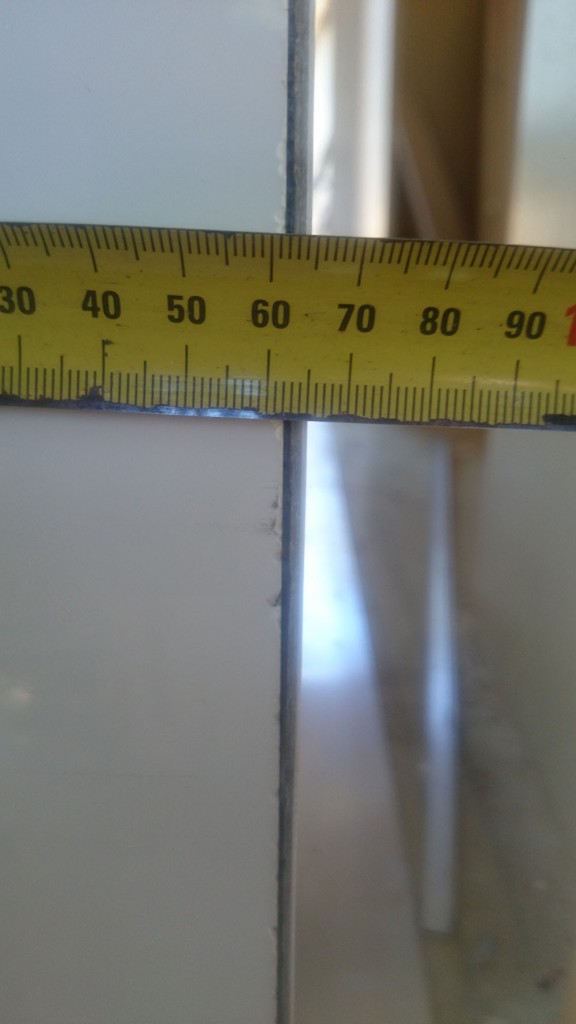 The box is just 1mm smaller than the distance between the tracks of the mechanism, this is a more than perfect fit. 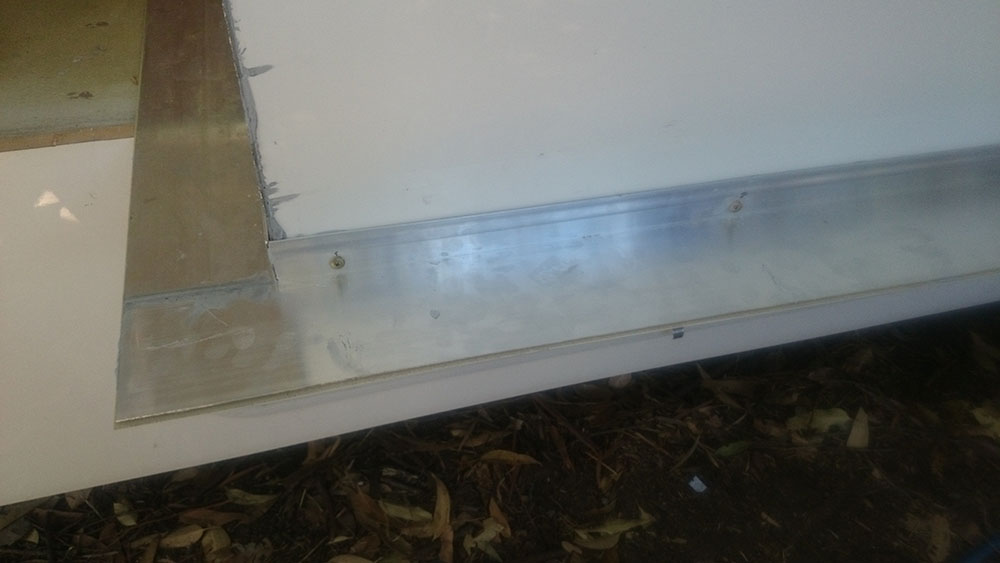 In the next step I glued the angle to the outline of the box overlapping at the corners to make them stiffer. Originally I wanted to tig weld the corners but it is much easier to glue the pieces on one by one and glue the aluminium, which is good enough.  It worked out really well. 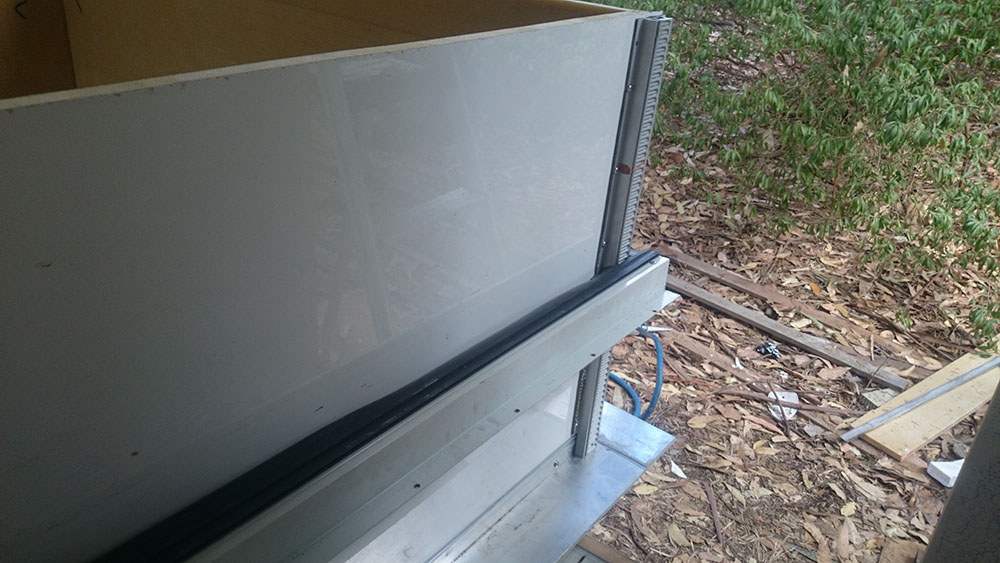 Then I mounted the slide-out mechanism with stainless steel screws. The image below shows the upper track of the mechanism and the next image shows the lower track. 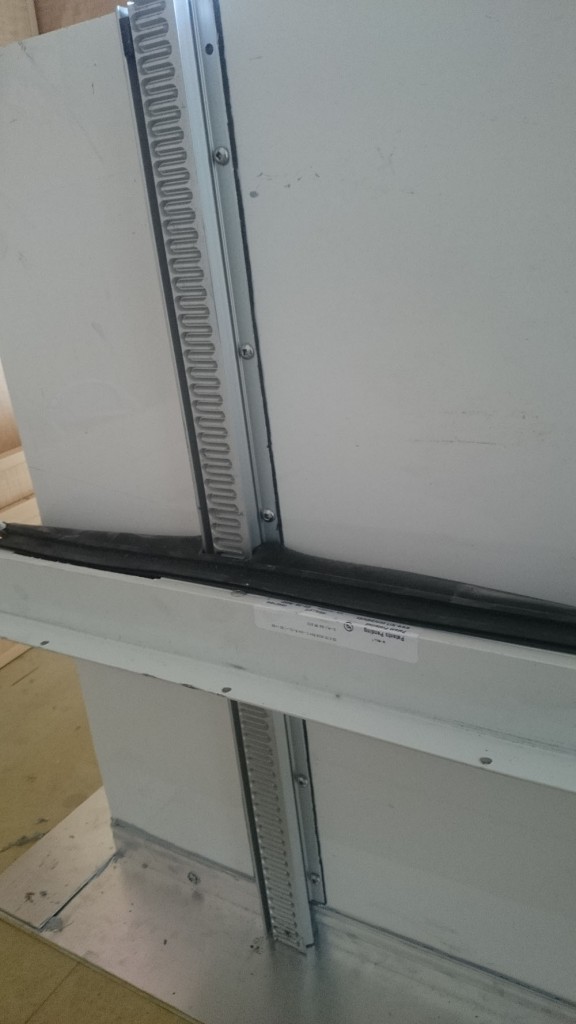 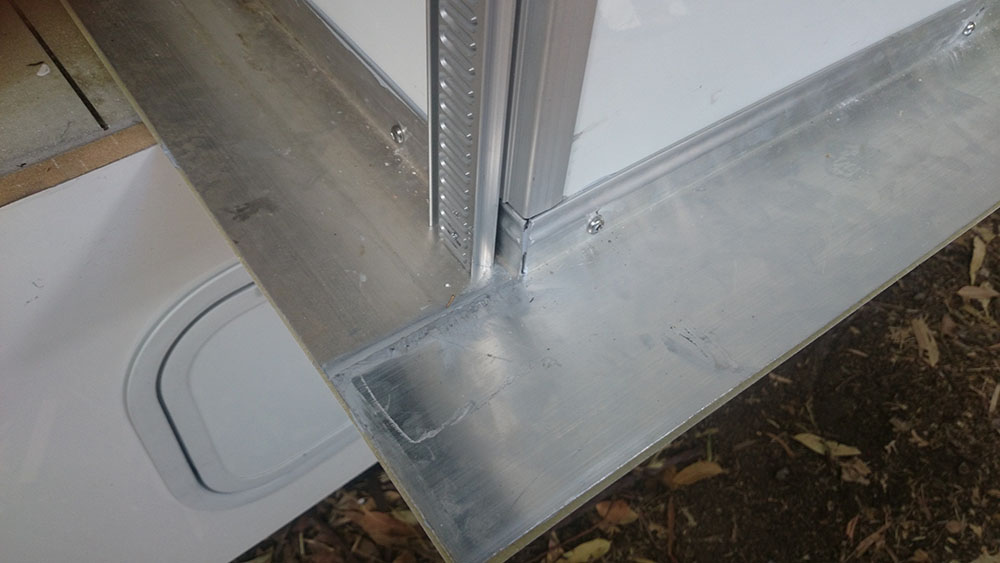 The lower corner worked perfectly, the angle being exactly as wide as the bottom guide of the mechanism is recessed from the corner.

The top edge on one side is not that crash hot. I should have cut below the line and not above, however that is easy fixed with a sander. At least the line was spot on.

Originally I wanted to powder coat the alu angle but I simply do not want to delay the process by waiting for the parts and I do not really care that much about the looks on the inside of the slide-out. 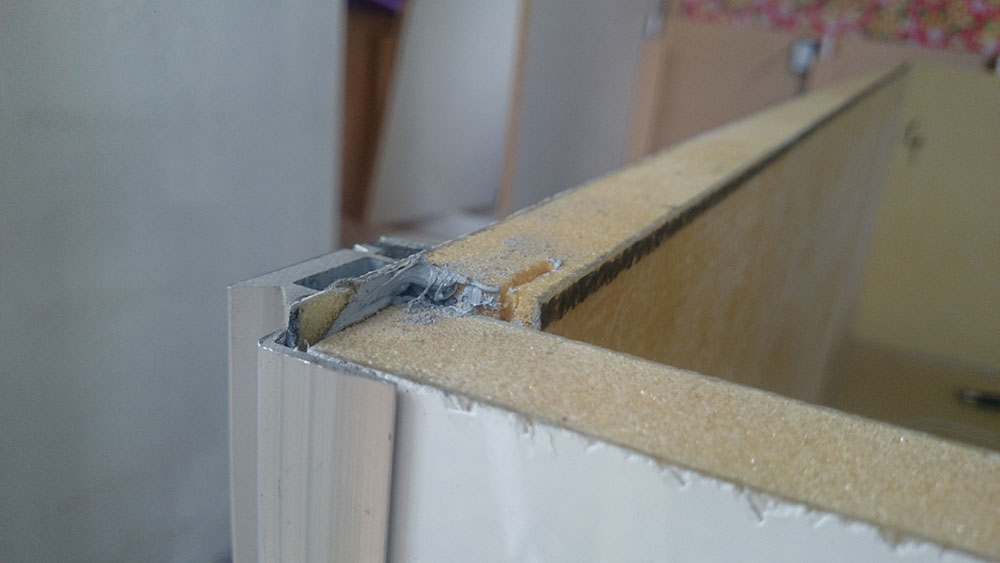 The box is now fully prepared. The next step is to prepare the opening for the slide-out. This will be described in the next step.