I had quite a bit of trouble with the slide-out mechanism on several levels. Here is a summary of my findings and what I did or going to do about it.

As described in previous posts my slide-out box is made differently than the average Lippert (Schwinteck) slide-out. All slide-outs are made of a box and then a frame is put around the outside and the inside of the box to cover the mechanisms and the gaps as well as sealing the wall in both positions. The frame on the outside is usually 100mm wide and is connected to the box through an angle which is screwed onto the box. The corners of the frame is covered with a special corner piece made of plastic.

My concept is totally different from that because I do not like the appearance of these slide-out frames and the plastic corner pieces. They go yellow and become brittle after a while in the sun. In my case the gel coat of the wall panel extends 100mm past the box and is supported by an aluminium angle screwed to the box. The alu I use is only 1.5mm thick and is sufficient to compress the bulb seal around the outline. The alu extrusions used typically for this kind of slide-out is 3mm and quite heavy, especially with 3 slide outs. My concept is much lighter and this is also the reason why I chose the Lippert system, which is also used by Jayco. Jayco sells the frame extrusion for $26 a meter, which was another reason I do not use it, because it is a total rip off.

The down side of my concept together with the Lippert system is/was the fact that the geared motors pull the box in very hard and make the gel coat with the alu angle bend out a bit.  The control unit is supposed to stop the motors when a certain stall force is exceeded, however this stall force is not widely adjustable. One can adjust the stall force using a poti inside the control unit, but I still measured between 24A and 35A for the min and max setting, which was enough to bend a 5mm stainless steel bolt. The mechanism draws only around 2.8A for normal movement and one would expect that a current differential of a factor of 2 would be the minimum adjustable stall force and not a minimum of 10 times the operating current.

I checked the current going to the motors and confirmed the assumption that a PWM signal is used to drive the motors. One can see the visualisation on my oscilloscope in the image above.

Another problem with this mechanism is that once one releases the switch the box is still moving a fair bit until it comes to a stop making a real precise control of the seal pressure impossible. They simply work with brute force to close the slide-out and press the seal against the body wall. This is not the way I do things. While the slide-out box and frame may hold up to such treatment in the beginning but after a while I expect stability problems with this pressure permanently applied to the frame and angle.

I use composite panels and it is quite easy to rip out a screw from the gel coat when such pressure is applied. While it may last a year or two but eventually something will give.

Another reason I need a better stall force adjustment is that I intend to automate the opening and closing of my slide-outs. I do not want to manually control the slide-outs but let the central system do it and make the slide-outs stop at the proper position without interaction. This requires a more accurate system than the Lippert controller. 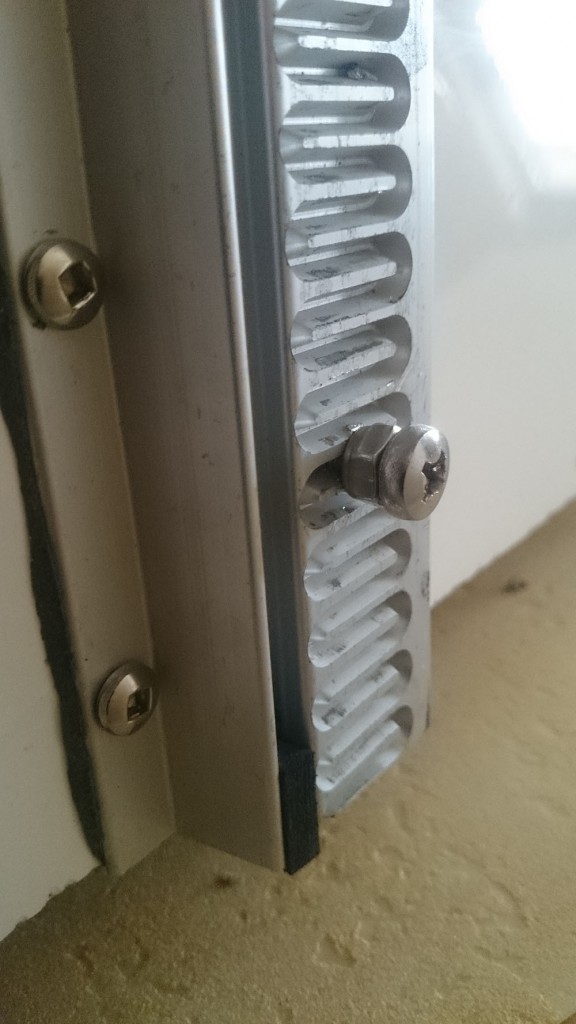 It is possible to block the track at the right position and make the little tooth wheel run into the block and stall the motor but this does not look like a good idea either because the wheel is made from brass and will be eventually damaged. I decided to use a bolt in the track to let the vertical side angle run against it. I adjusted the stall force to the available minimum and have placed the bolts as stops for the in and the out position. The picture shows a 6mm bolt which I used after the 5mm bolt got bent by the motor force.

The track is not very accurate either, there is a lot of play between the tooth wheel and the track, but this is not the worst part.

While playing with the mechanism and doing the tests, the wall angle on one side came off on one end and made me look into it a bit closer. 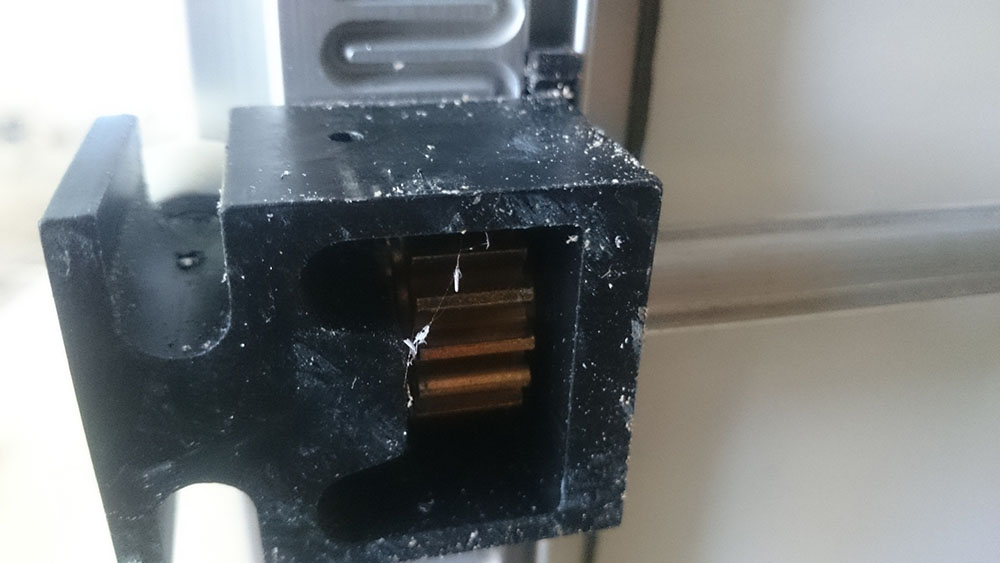 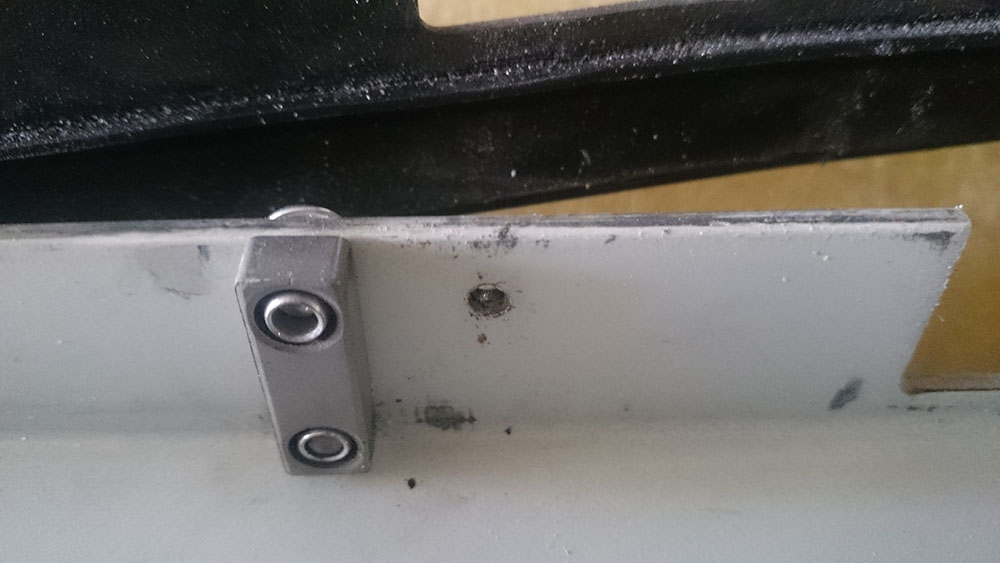 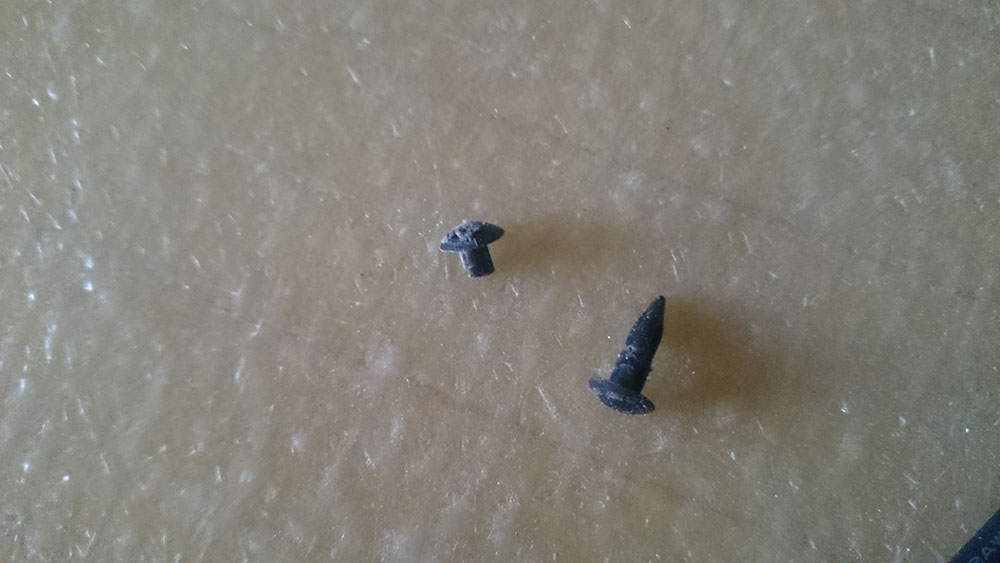 One of the pins was already broken off and this is the reason the wall angle came off. The little plastic pin was situated under a rubber seal. After the pin has broken the slide-out mechanism is not fixed any more inside the opening. It cannot fall out, however the box can slide from side to side depending on the tolerances between cut out and box and mechanism. Not a good idea because it can cause uneven mechanism movement. Even with minimal movement the plastic pins will sheer off eventually. The other side of the mechanism was secured with a 3mm rivet. They probably had already discovered a problem and tried to fix it quickly. The lower block was fixed with the rivet, the upper still had the plastic pins. 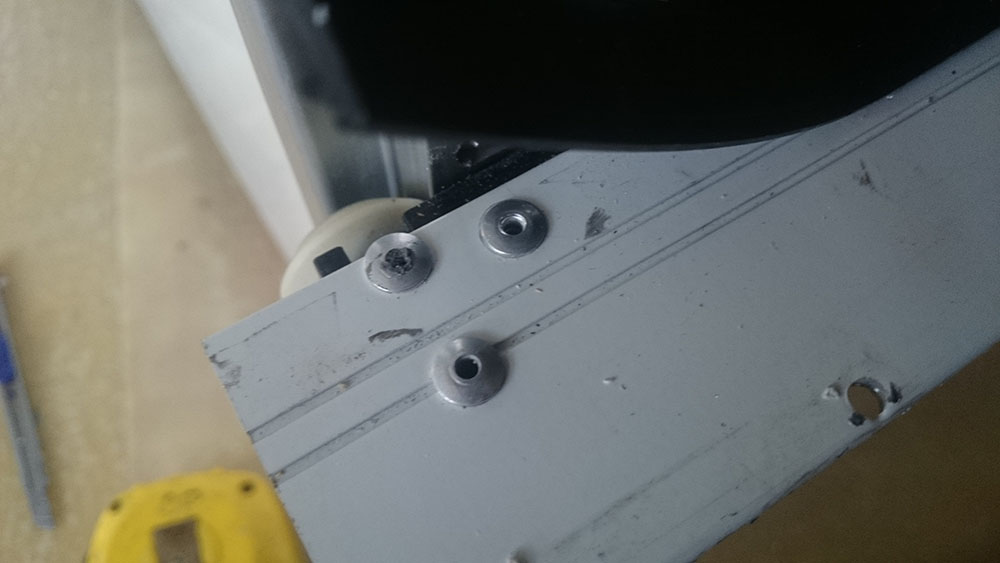 The image above shows the my 5mm rivet securing the wall angle to the guide block. Now the box will not move from side to side. 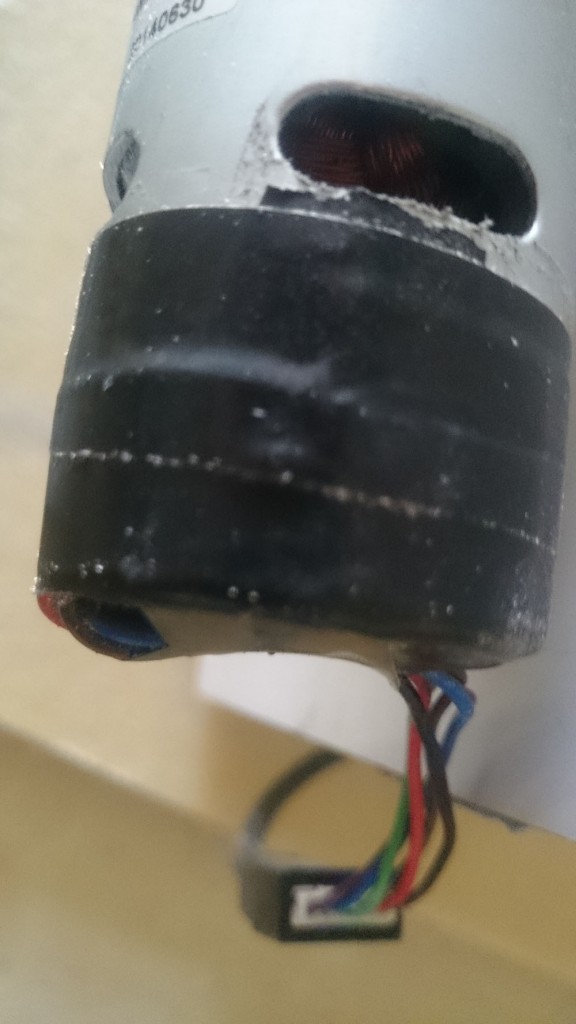 Another quality issue is the motor end cover. The spare motors I had ordered have a plastic cover over the end, which is far too big and falls off all the time and one was already broken despite being packed in foam. Must have happened before the transport.

The motors in my slide-out mechanism all have electrical tape around the body to protect the motor windings. This is absolutely unacceptable because electrical tape will eventually come off due to permanent temperature changes. May not be a problem in the first years but eventually the tape will loosen. I removed the tape and replaced it with proper heat shrink, which will not come off.

For now the slide-out works and stops at the right positions, however I will replace the control units with my own. I will be able to adjust the stall force much better and it will not require bolts to stop the mechanism although it works and when the control unit is more sensitive and reacts quicker than the current one I can adjust the desired pressure on the outer seal exactly the way I want it.

This is really not the greatest of products, generally a good idea, just the details of implementation are not really that smart.