Have started to do some preparations for the electrical installation. Have fitted the braces for the batteries to fix them properly to the chassis and have done a sample connection for the first fuse  to the positive battery bus I made from some flat copper bar. 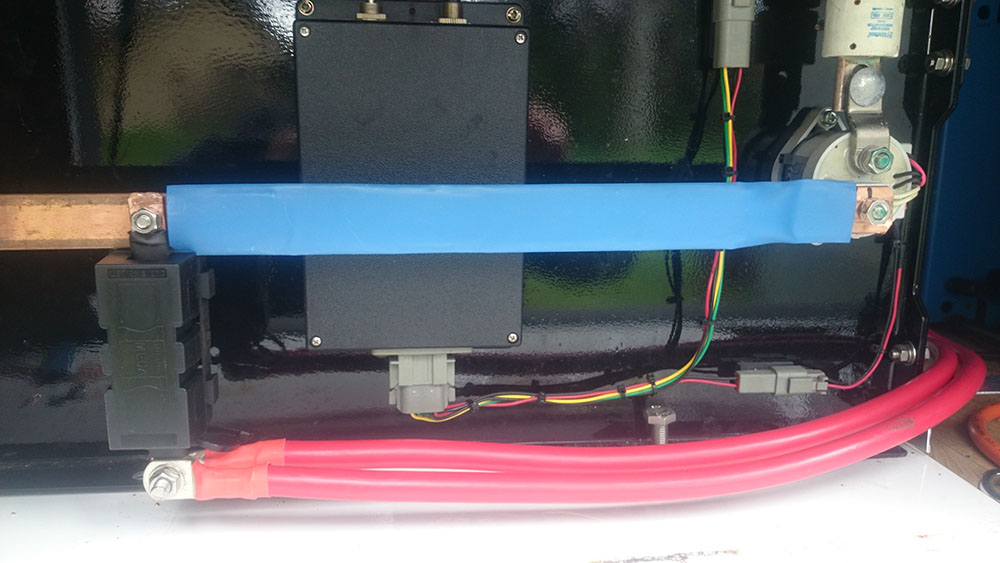 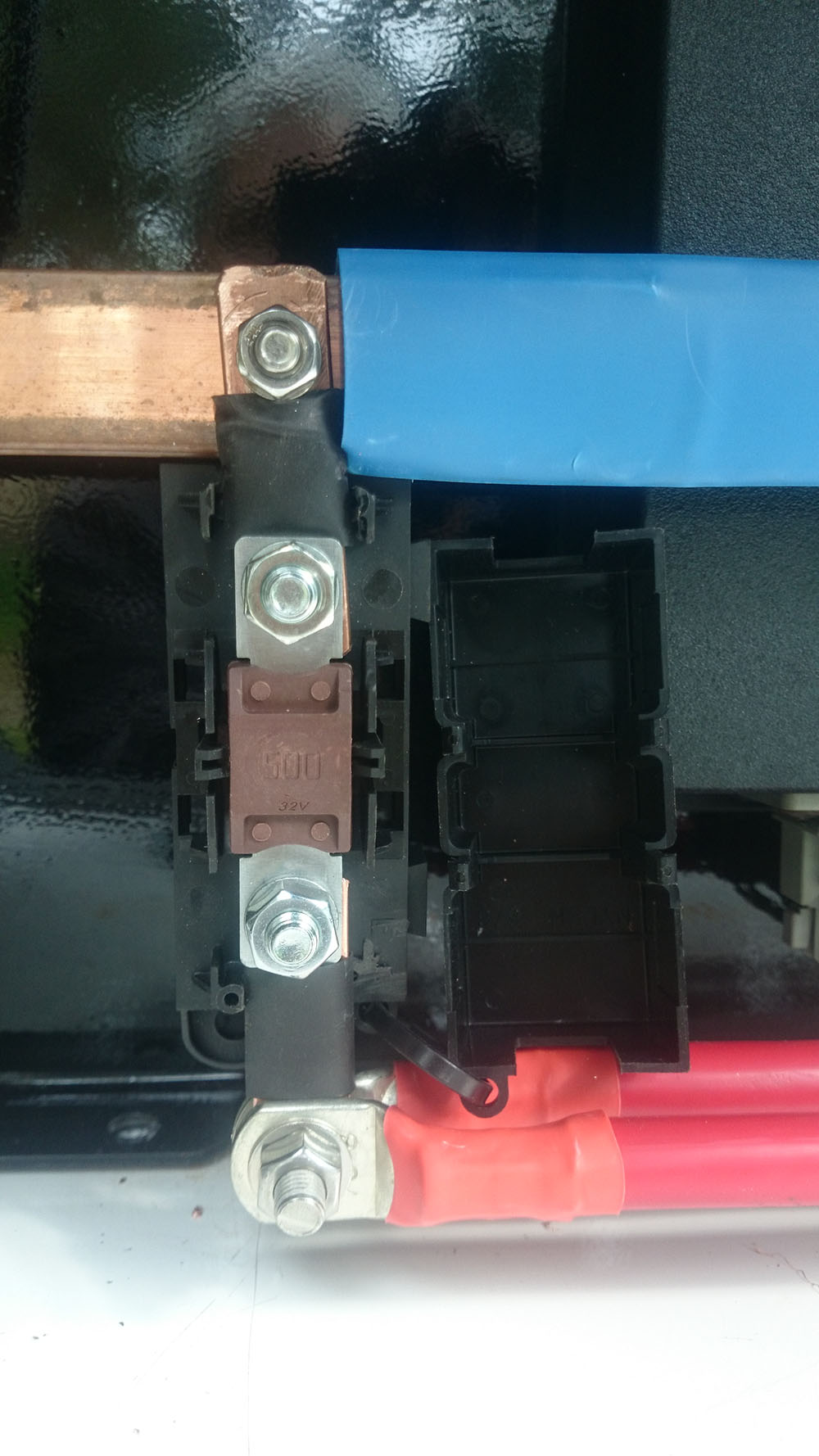 The main switchboard case is installed and before I can continue I had to finalise the plan for the power distribution of the 240V AC supply. 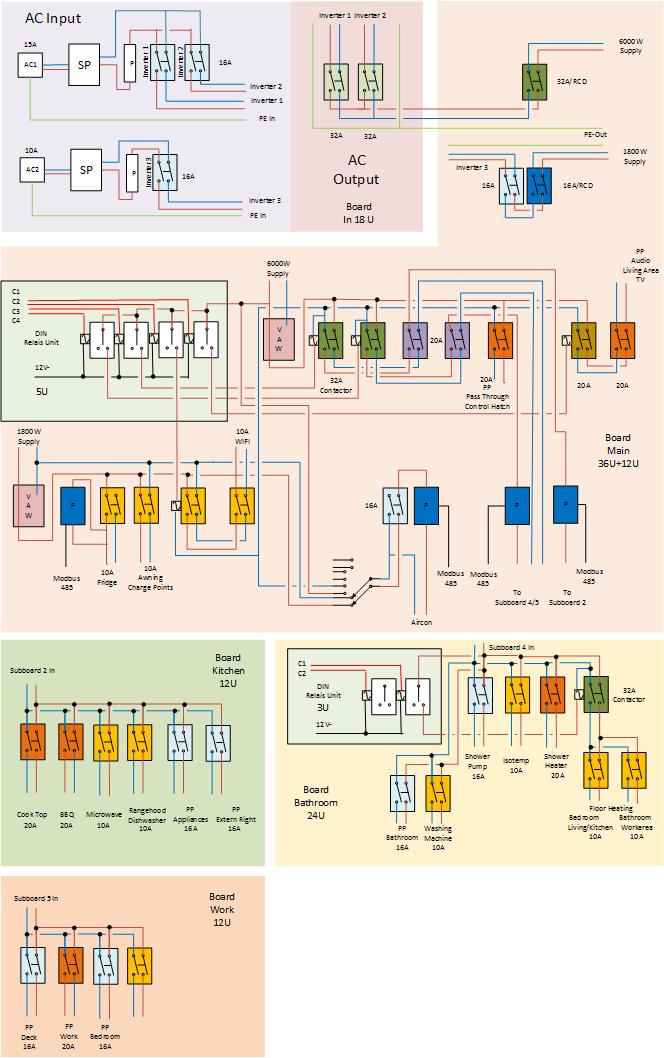 The image above shows the switchboard for the AC input through a 15 Amp and a 10 Amp socket. I use a total of 3 inverters, two 3000W Victron Multiplus running in tandem producing 6000W output and a smaller 1800W Xantrex for all loads needed continuously including the fridge. The 10 Amp input is connected to the smaller inverter. This way I am able to connect with a standard 10 Amp cord to any household power point when I have shore power available but not a 15 Amp.  For each input socket I have a surge protector and a power meter connected. The connection to each of the inverters is protected through a circuit breaker. All breakers and contactors are double pole as required by the standard and good practise. I do not use a generator and as a consequence I am not planning to install an RVD. The RCDs will be enough since all inverters have a proper transfer switch for the AC input, which creates the N to Earth connection at the inverter outputs for the RCDs to work properly.

The Victron output is combined into a single 32Amp breaker and RCD. The inverters are connected with a VE.bus cable and create the AC output phase synchronised. Both inverters run off the same battery and the supply cables have to be identical, same length and diameter.  The third, smaller inverter is connected to a 16 Amp breaker and RCD.

I was contemplating to install a switch to bypass the inverters and use the AC-in directly when available but it increases complexity even more and it has no real benefit to me since we do not plan to be on powered sites that often anyway.

The main switchboard contains breakers, RCDs, contactors and power meters for the subboards and some circuits. I am curious about the efficiency of the system and have allowed for several power meters for my studies. Each inverter output is monitored through a power meter with a Volt, Amp and Watt display. I have a separate power meter for the fridge and the aircon because I am interested in more detail of their use. These two power meters have modbus outputs, meaning I can read out the data regularly with an Arduino and create statistics of my use cases.

The subboards are connected through 32A contactors which are normally open, reducing the power consumption because all standby currents are eliminated. The subboards will only be powered when needed. One subboard covers all the kitchen appliances and the external bbq and the others control the rest of the van. When we are away from the van or driving the two larger inverters will be switched off and no unnecessary standby current will be wasted. The smaller inverter for the fridge is still much bigger than one would need for the fridge, but I also power the awning and the Wifi routers from it when everything else is off. Another reason was that I still had this inverter from my slide-on installation and I wanted a proper transfer switch for this separate AC input, which smaller inverters do not provide. I will accept the higher standby current of the larger inverter but in the scale of this installation another 400 mA  will not break the bank (battery bank that is).

The contactors to power some circuits and the subboard have a 240V coil which is not that great to interface to the central system or separate manual switches. For this reason I use a set of DIN mounted relays allowing me to drive these contacts with 12V from both the central Linux system as well as some manual switches as backup. This way the 240V stays inside the switch board. Another reason for that is that the 12V relays have more poles than typical 240V relays allowing me to connect feedback circuits.

The downside is that it needs a lot of DIN rail to install this because I do not use the single module breakers. I am not paying the premium for that since I have the room. Using the larger breakers with more space also makes it easier to wire it up.